In the world of sports, it’s kind of like wondering how the Pyramids were built, or who created Stonehenge. It’s just one of those elusive mysteries. Or is it?

By Grady Wheeler and Jon Cudo   (reposted from 2000)

In the world of sports, it’s kind of like wondering how the Pyramids were built, or who created Stonehenge. It’s just one of those elusive mysteries.

Sort of like figuring out who is the one, true creator of “The Wave.” Every sports fan has participated in the infectious stand-and-sit surge or watched it ripple around sports venues, but who created it? Like Stonehenge and the Pyramids, the answer is not without its complexities.

The University of Washington and its Husky fans claim they started the Wave on Oct. 31 1981. A man who calls himself Krazy George says he has irrefutable proof that he created it just weeks prior to that alleged birth date.

Jim Daves, Assistant Athletic Director for Media Relations at the University of Washington, says it was a game between the Huskies and the Stanford Cardinal where the wave was born, and that Rob Weller, a former Husky Yell King, is the lone creator.

Rob Weller, the one-time host of Entertainment Tonight, was credited with reviving the spirit of Husky fans with new innovative cheers as a member of the UW Yell Squad in the 1970’s and is the front-man of UW’s Wave claim.

And this declaration does have some proof to substantiate it. A 1999 Seattle Times Story and an ESPN.com story posted last fall both credit the University of Washington and Weller as the originators. 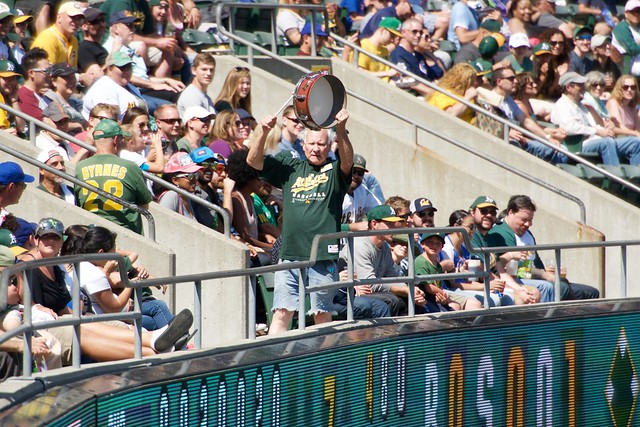 But Krazy George, who has been a sports entertainer for the past 32 years, says he has evidence of his own, evidence he thinks should end the debate. His proof lies in the form of a Major League Baseball archive video of a nationally televised playoff game. The tape shows Krazy George leading what he believes is the first wave at a game between the New York Yankees and the host Oakland Athletics on October 15, 1981, just 16 days before UW’s date.

A Dallas Morning News article from 1984 recounts Hall-of-Famer Joe Garagiola memories of the game. While broadcasting the game, Garagiola recalls begging producer Don Ohlmeyer to “Get it, get that thing!” on videotape.

“I remember during the game that all of a sudden the fans started getting up and then sitting down, as I remember, it looked the same or better than what they’re doing now,” Garagiola said. “I had never seen anything like it. It was super.”

Garagiola recalls begging producer Don Ohlmeyer to “Get it, get that thing!” on videotape.

Although Krazy George has stood by his claim for nearly 20 years, the debate recently re-ignited when Krazy George reasserted his title on his web site, GetKrazy.com. This incensed faithful UW Husky fans loyal to the long-standing contention of the University of Washington who called Krazy George a liar and an “old kook” in online chat rooms.

The debate is certainly not new. In the Monday Night Football booth in the early 80’s broadcaster Don Meredith suggested that Seattle fans gave sports the Wave. The ever-contentious Howard Cosell begged to differ, citing his reliable sources that one Krazy George started the first wave.  Being the creator of something that has entertained and motivated billions of sports fans around the world must be a source of great pride. Both parties have clearly enjoyed the notoriety that goes along with generating a pop culture phenomenon.

Krazy George states in his recent release, “I created it and I’m proud of it and the career it has given me.” The University of Washington has a storied history in sports and entertainment, but that story now appears not to include the creation of the wave.

This debate will probably continue as campus folklore will certainly die-hard. University of Washington’s former sports information program assistant Pat Carroll stated, “We’re claiming (the Wave) and we always will.”  In the meantime Krazy George, now with the confidence that he has proven his claim with this archived footage, feels he has put an end to the debate and will likely refocus his efforts of defending his other claim as “World’s Sexiest Professional Cheerleader.”

Grady Wheeler is a freelance writer in Portland, OR whose work has been published in Reader’s Digest and numerous periodicals in Portland and Chicago. Jon Cudo is the Publisher of the sports entertainment industry web site, Gameops.com.

Kobe Love From the North

Static banners and scoreboard graphics are staples, however many sponsors want new, fresh and innovative signage. To meet that demand by sponsors who crave “new”, we are proud to introduce the BackPack Banner™, perfect for your interactive performers and crews.