The Waterloo Black Hawks are celebrating 50 years of their Thanksgiving Game, a promotions stuffed with all the trimmings.

Waterloo Black Hawks are celebrating 50 years of their Thanksgiving Game.  The party started with the announcement of the game and they posted a new detail daily for a week to really cook up excitement for the game.

It started with a custom logo for the anniversary.

The Waterloo Black Hawks began a weeks’ worth of announcements related to the community’s 50th Thanksgiving hockey game by revealing a special logo for the event on Monday. 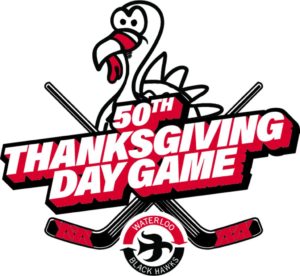 The image centers on a turkey with a quizzical look, peering over bold text noting the “50th Thanksgiving Day Game.”  The logo also includes crossed hockey sticks and the familiar Black Hawks emblem.  The team will not be wearing the Thanksgiving logo during the matchup on November 26th against the Dubuque Fighting Saints, but it will appear in several places leading up to and during the game.

“Thanksgiving is obviously a family holiday, and the cartoon turkey in this logo represents that sense of family fun,” said Black Hawks President of Business Operations Joe Greene.  “From Tommy Hawk on the ice at intermission, to the contests and activities on the video board, to the excitement of the game, we are always looking to enhance the fan experience, with an eye toward things families will enjoy, whether that is on Thanksgiving or during any other home game throughout the year.”

Next the team announced a new book featuring the history of the game.

50 Thanksgivings; Waterloo’s Hockey Holiday, reviews the 50 games played on the final Thursday in November (including the only “away” game, when the Black Hawks skated in Sweden during a 1968 trip to Europe).  The tradition has been a rite of passage for Hawks players and fans, and the book provides details about each game, box scores, an index of all Waterloo Thanksgiving goal scorers, and dozens of photos.  50 Thanksgiving also provides a look back on many other Thanksgiving moments in the Cedar Valley, from Santa Claus arriving by train for the holiday in the 1960s, to political candidates circulating through the state ahead of the Iowa Caucuses, to some of the popular gifts fans were likely to be shopping for in the days after the game.

Ticket Sales have been pushed back to mid-November to allow the team to accurately adjust for any local COVID policies, so they don’t oversell the game.

Waterloo Black Hawks single-game ticket purchases will only be possible during limited windows of time throughout the 2020/21 season, due to unpredictable potential fluctuations of Young Arena’s seating capacity based on COVID-19.

The team has long attached their Teddy Bear Toss to this holiday event, this year they are tweaking the plan to adjust for COVID concerns.

The Waterloo Black Hawks are asking fans to be kind to a special group whose sole mission is to make us feel better: America’s Teddy Bears.

Rather than sending cute plush toys hurtling hundreds of feet through the air and landing on the cold, hard ice during the annual Thanksgiving Teddy Bear Toss, the Black Hawks will hold a gentle Teddy Bear Round-Up before the November 26th meeting with the Dubuque Fighting Saints.  Fans providing new bears with tags will still be helping Toys for Tots, People’s Community Health Clinic, and other organizations which will use the toys to brighten the lives of children this holiday season.  The Black Hawks will also round up teddy bears ahead of the Wednesday, November 25th Thanksgiving Eve matchup against the Lincoln Stars.

The team will also play the night before Thanksgiving, a first for the franchise.

Great work making adjustments to the promotion due to the Corona Virus, and finding ways to keep the tradition alive and thriving.

Fill in the blank…

"The most exciting Black Hawks Thanksgiving news this week was _______"

See more on the Teddy Bear Toss on Gameops.com:

Best of Water Cooler 2020 Bracket One

The measure of success from two different teams is remarkably similar.

A little Ooooom in the outfield in Nashville.