The Michigan K-Wings celebrated the 20-year anniversary of their now-famous Green Ice Promotion. Every St. Patrick’s Day for the last 20 years the K-Wings have dyed their ice green to celebrate St. Patrick’s Day. (updated interview from 2001)

The Michigan K-Wings celebrated the 20-year anniversary of their now-famous Green Ice Promotion. Every St. Patrick’s Day for the last 20 years the K-Wings have dyed their ice green to celebrate St. Patrick’s Day.  [Editor’s Note: Interview conducted in 2001, updated with photos, links and videos June 2020].

What started as a wild idea in a brainstorming meeting has now resulted in 20 straight years of sell-outs, national media attention, and a slew of related promotions for the K-Wings.

Last week Stephen Doherty joined us in the midst of the K-Wings preparations to talk about the Green Ice Promotion from Kalamazoo, Michigan. 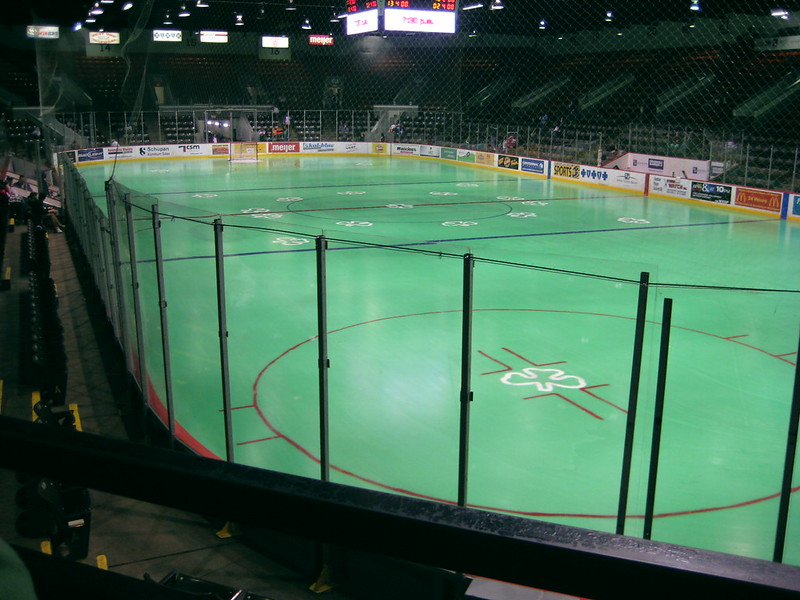 Gameops.com: Tell us how the Green Ice Promotion all started.

Stephen Doherty: This a promotion that started 20 years ago. We were sitting in a brainstorming session trying to figure out how we could bolster the attendance at some of our hockey games. I had joined the organization in 1978 coming from the Boston area, which needless to say is heavily populated with Irish people, so jokingly I said “Geez, why don’t we dye the ice green for St. Patrick’s Day?” Everyone looked at me like I was an idiot (and I guess that I was to some extent). Then something went off in everyone’s head. Through this brainstorming session we decided, let’s dye the ice green and we will have a Saint Patrick’s Day promotion.

It was an overwhelming success. I think just the fact that the promotion was so unique and there was such a curiosity factor that we packed the building that first game.

There were a lot of things that went wrong that first year, but as the years went on we improved our technique and its just turned out to be a wonderful packed house every single year. We have received national recognition via radio, newspapers and television for the promotion. In fact last year we were on the cover of the USA-Today on March 17th.

Gameops.com: So this has really turned out to be a trademark promotion for the K-Wings.

Doherty: It’s been kinda fun. I have people calling me year after year from all around North America who have hockey teams and they want to dye the ice green or to do special uniforms or want to know what we are doing for special events and attractions and entertainment during the course of the evening. Its been fun to share those thoughts and processes with the people who have called here.

There just seems to be a lot of interest still after 20 years. We are doing radio interviews from Seattle Washington and Portland Maine from stations who pick up on this thing.

We have now even expanded it a little and we just had our first Valentines Day pink ice game a few weeks ago that also had some national pub with Sports Illustrated. It was just another one of our colored ice games that help us draw interest and attention.

Gameops.com: Do you have to specially treat the ice to get the desired effect? Did I read about one year where the ice came out slushy?

Doherty: Well, yes that was our first year. We had a lot of things that went wrong that first year, since we didn’t know what the heck we were doing. We didn’t know how to dye the ice green so we decided to use food coloring. What we did was filled the Zamboni machine with water and green food coloring. We laid down the green with the Zamboni. First of all it came out streaked, almost candy cane looking, but the ice was definitely green, and people enjoyed it.

During the course of the night it never seemed to fully harden, there were always some puddles on the ice. 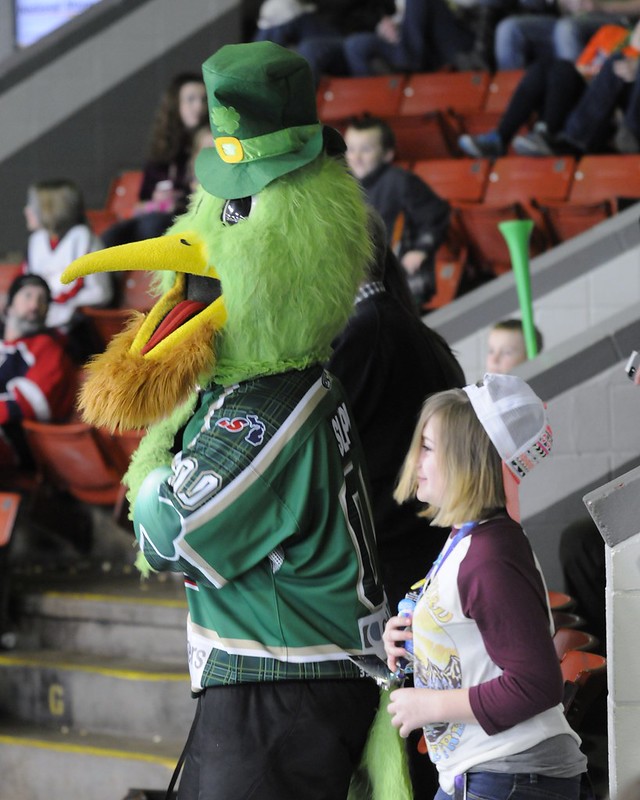 We also had put some Shamrocks on the ice, but rather than tissue paper we used a very thin piece of cardboard. What happened with those is that the air-pockets in the cardboard cracked and popped when guys skated over them and they cracked and chipped the ice.

It was a comical evening to say the least. When guys went down on the ice they would get up with green dye on them. I remember when one guy from the other team had a breakaway he crossed the blue line and got to the top of the slot. He was all alone. As he skated over a puddle the puck stuck in the water and he kept going and the puck was 15 feet behind him.

We have since resolved all those things. We found out from a bakery that food coloring has an element in it that stops it from freezing. Once we found that out we started using a water based green paint. We put the paint in a 100 gallon tank with water. We then spray the ice with the colored water. The whole process takes about 6-7 hours to complete, but it looks magnificent.

Gameops.com: I guess the question begs, do you even have a large Irish population there in Kalamazoo?

Doherty: We really don’t. I think it’s more Dutch than anything else. But I don’t think that really matters much. It’s really just a fun night for everyone.

Gameops.com: Let’s talk about what else you are doing on those nights.

Doherty: We have done pretty much everything. From green water in the toilets to trips to Ireland. There isn’t much we haven’t tried after 20 years.

Gameops.com: So what do you have planned for this year?

Doherty: We have an Irish bag-pipe band that will come in and perform, we have Irish dancers that will dance during the intermission. We have lots of giveaways, and of course green beer. 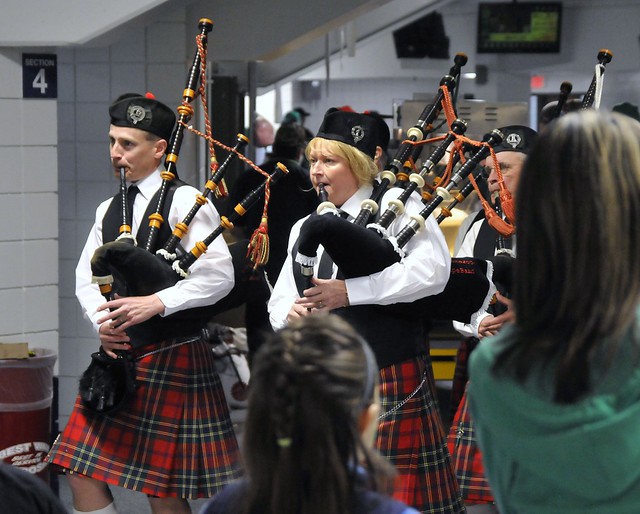 This year it is mostly focused on the Irish dancers and singers providing the entertainment.

Gameops.com: Sounds like it is a lot of fun and a great promotion.

Doherty: It really is a lot of fun for our fans. I wish we could do something like this 41 nights a year.

Of course if anyone is interested in hearing more about it they can contact me here directly. We are more than happy to share our ideas and our experience with them.

Gameops.com: Thank you for your time.

Stephen Doherty was named Vice President and General Manager of the Kalamazoo Wings on July 27, 2000. He also serves as Alternate Governor of the franchise.

Doherty, 49, is the bridge between the old and the new in Kalamazoo Hockey history. He joined the IHL’s Kalamazoo Wings in 1978 as Director of Public Relations and served in several different capacities over the next 22 years. From 1978-1993, Doherty also served as the color commentator on Wings radio broadcasts, and assumed the play-by-play duties for the 1993-94 season. After that year, Doherty was promoted to the position of Director of Marketing and Communications, a position he held until the Michigan Wings declared inactive status in the IHL on April 17, 2000.

A native of Newton, MA, Doherty received his bachelor’s degree from Nathaniel Hawthorne College in New Hampshire and earned his master’s degree at Springfield College in Massachusetts. Doherty and his wife Carrie have two sons, Stephen and Matthew.

Thanks to Stephen Doherty of the K-Wings. Stephen has been a long-time supporter of Gameops.com and we appreciate his time and insights. 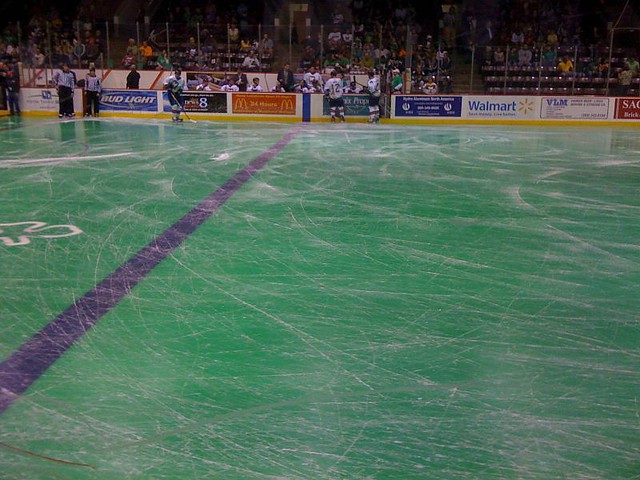 Sixers ring in games to light up the crowd, and the team now follows with post-game bell ringing celebration.

KZoo takes home the ECHL top honors for marketing in part for their epic year of the fan plan.