Riders™ costumes create an entertaining visual spectacle for your fans and offer flexibility that will help personalize the promotion for your team or your sponsors. A new sponsored contest has been developed using a fantastic product called Riders™. These costumes create an entertaining visual spectacle for your fans and offer flexibility that will help personalize the promotion for your team or your sponsors. Use Riders to spice up an old promotion, strengthen a sponsorship tie or create a new in-game contest.

Riders™ are costumed optical illusions. A performer (or contestant) steps inside and walks upright and this innovative costume does the rest. Currently Riders™ have several existing costumes, including the popular chicken, ostrich and duck. Many other costumes exist and a custom design can be made. Gameops.com now has an expanded selection of Riders on The Store at Gameops.com, including the Ostrich Rider™, Duck Rider™, Chicken Rider™, Pig Rider™, Buffalo Rider™ and Turkey Rider™.

Imagine your next game featuring a sponsored race on the court. The race would feature two contestants….and each contestant would be riding on the back of a giant chicken! The contestants race from one end of the court and try to make a basket while perched on the giant poultry. The first one to make the basket wins dinner at the local Kentucky Fried Chicken (or similar sponsor).

This year the Seattle Storm (WNBA) added Rider™ costumes to their entertainment inventory, and did so in a innovative way.  Here is the Storm’s video element that they use in-game.  The integrated players and added a nest with some hilarious results.

As an entertainment element:

Another Rider has been used as part of a popular entertainment act for the Crazy Hot Dog Vendor (who also won a Best Mascot Honorable Mention Award on Gameops.com).  He rides a Ostrich Rider as part of his act.

Click to see the full collection of Rider Costumes now in The Store on Gameops.com 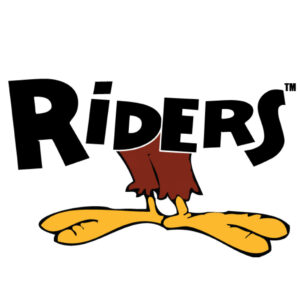