Pistons’ Claire Czerniuk shared how her background as a performer has helped elevate the Pistons Dance and Entertainment Teams.

The August 18th Huddle featured Detroit Pistons’ Game Director Claire Czerniuk. Her rich background as a performer and dancer has helped her elevate and maximize the Dance and Entertainment teams in Detroit.  Claire shared specific examples of how her background helps the Pistons get the most from their dance teams. Topics included staging, dancer communications, pre-game meeting advice, overcoming COVID limitations, and Claire’s secret in-game sound effect. Plus she explains the most important questions to ask before you send your team out in front of the crowd: “What is their purpose?” 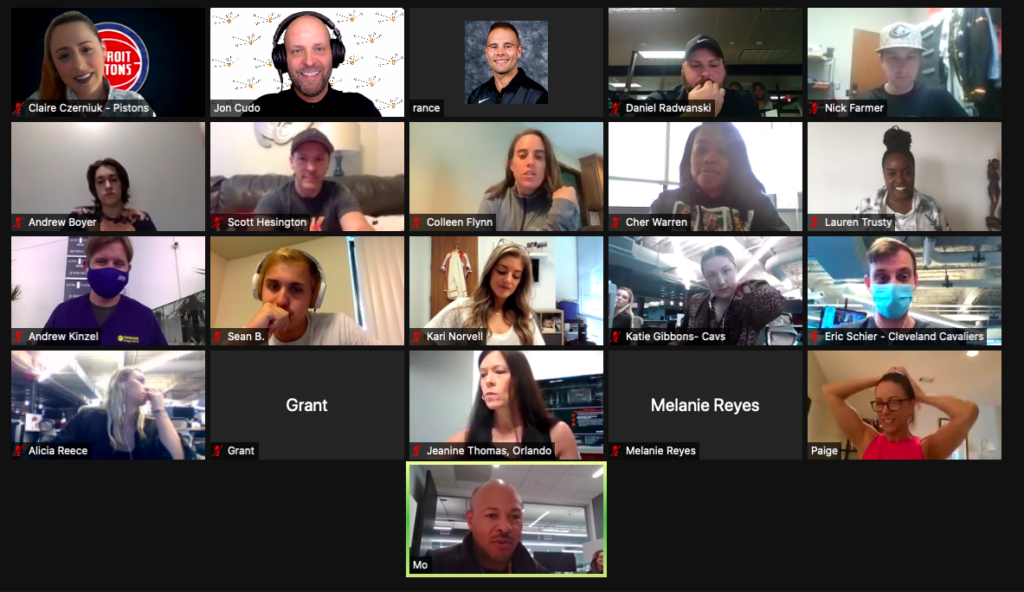 Gameops.com Plus Members will have full access to the video of the call as part of their membership.

Here is a quick sample of the conversation:

Cudo: We have a question for Claire in the chat box. I love that we’re using the chat box for this. Colleen Flynn, as Claire, do you have a designated game at Stafford with the dance team at all times? And how do you communicate these on the fly changes to your team?

Claire:  Yeah. Their dance director is on a headset. We also gave an errors to the captains last season because we were asking them to do sidelines. And I had point to point with those people, so they knew what was coming. If they were paying attention. I try not to change anything that’s choreograph. That’s like slotted for them as far as routine wise, obviously. But for those extra time else we had, the dance director had hand signals so certain hand signals that she would give them from afar. And then if they didn’t pick up on it, which they usually did, we would communicate over the inner.

And then it was up to the captains who were always in the front of everyone. No matter where they were positioned. They were always ahead to give the hand signal to the rest of the group and then start it. So everybody knew what was next. So that was more that was a resolution for sidelines. But the whole BPM thing really helps most of the hot time out stuff, because you’re never putting them in a scenario where they can’t catch it. So whatever decision they make on whatever choreograph dance moves they’re doing, they’re going to catch it because the BPM is right.

We’re never putting them in a bad scenario where they can’t just do it on the fly.

Cudo: Very nice. Great question, Colleen. Great insights, Claire. Claire, you talked about something else that I think kind of comes from being a performer. And that is the more that director shares with you, the better understanding that you have of that vision. And you talked about as a director, how you really try to spend that extra bit of time with your dance team, with your entertainment teams, with your mascot, to share your vision so they can understand and implement what you’re trying to accomplish. Can you talk about those interactions?

Claire: Yeah, I know that a lot of teams have production meeting before the game and meetings before that production meeting. And it’s really helpful. I tried to be the voice of those meetings and not pass that off for someone else to kind of hold, because I found that in my experience, if I knew more than I would have done it differently or perform differently had I known what the vision was. So I just try to give as much insight as I can to the teams, even if you don’t necessarily think this might not affect the mascot, but him knowing that we’re doing this in the second quarter and why this is so important to go so smoothly, he might be able to support, or he might be able to fall back.

He just understands what’s going on, even if it doesn’t affect it right. Or he can maybe insert himself in a way that I didn’t necessarily think of, but I just tried to be really transparent, and I think we were also talking and about that in the fourth quarter worth or any hot time out at any point where things can get a little hectic just taking second to communicate where we’re going and what we’re doing, giving yourself that buffer of five to 10 seconds. You could communicate a lot in that little time, and it saves you a headache on the back end and then providing aside from all that, things can still go wrong, just providing triggers.

And this is something that we did at the Knicks that I carried with me, just like there’s a sound that all the entertainers know to leave, like whatever it is, if it’s the airhorn, whatever it is, that if you want to go to something else and pivot and pivot away from the plan, you’re not standing up, waving your hands and trying to get them to move off the court or stop or leave. So just having those triggers for the “Oh No” Moment and just do something else so that they all know what that audible is.

Cudo: I love that that was highlighted in my notes, your secret air Horn that only the dancers know that your sound cue hits and let them know that, hey, we’re going to transition and gives them a warning, like you said, as opposed to having someone flagging and down in the court and looking ridiculous.

You can join these calls as Member of the Gameops.com Plus. We have a One Month Free Trail for everyone, you can sign up here.

Meet a Drunk Lady and MORE

No Music, No Problem for Houston Crowd

A recent feud between a rock and a monster highlights the potential puppets can bring to your event production.