Water Cooler
Mustache and Green Screen take over Internet Get Your Oven Mitts and Free Water Here! Dad Jokes in Durham Zambabi in Tampa These Refs DO Know Jack

Rally towels are a favorite of sports teams, fans and sponsors. We specialize in providing the best towels and service for your needs. No one does Rally Towels better.

Rally towels are a favorite of sports teams, fans and sponsors. Rally Towels, Homer Hankies and Terrible Towels have a long history in sports. We specialize in providing the best towels and service for your needs. No one does Rally Towels better.

We have selected three towel solutions from dozens of options: The Economy Towel, the Gameops.com Rally Towel and the Gameops.com Over-The-Edge™ Rally Towel. This page has details on the options and a form to request a quote on your specific needs to take you all the way through the order process.

Please review the photos and information below. You can use our form below for more questions or to get a quote. We also encourage you to get a sample from any towel supplier, because you might find a cheaper price…but you have also found a cheap towel.

We have selected three towels that are the best solution to most requests: The Economy Towel, The Gameops.com Towel and our Over-The-Edge™ Rally Towels. The economy towels is good for limited budgets. The Gameops.com Towel is the best rally towel we have found (so good we put our name on it); 100% cotton with hemmed edges, this velour towel prints extremely well and feels great. Our edge-to-edge total print process transforms the towel to any color without the high cost or large minimums associated with a dyed-color towel.

Over-The-Edge™ Rally Towels are 18 inches by 15 inches, with an imprint area of 16″ by 13″. The background color goes all the way to the towel edge.

Legend has it that loyal Pittsburgh Steelers fans brought towels containing “magical powers” to games as early as 1974. In 1978 during their playoff run, a merchandising manager named Bernie Pollak decided to produce the towels. While the crowd routinely waved their “magic” towels, the players were not seen using them until January 7th of 1979 when Lynn Swann emerged from the introduction tunnel waving one of the now mythical towels. The towels followed the Steelers to the Super Bowl weeks later and has captured a piece of Americana ever since. 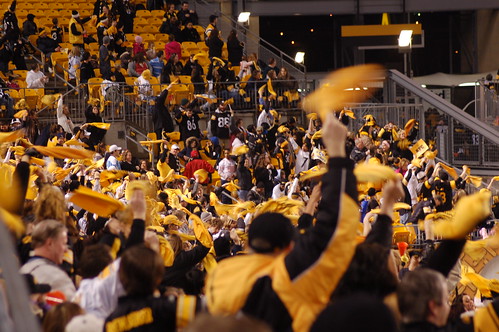 In 1987, (and again in 1991), the Minnesota Twins pumped new life into the idea of waving a piece of fabric at games with the Homer Hankie.

The towel has become a staple in sports premiums and giveaways.

As early as 1895 in Australia, pennant flags of winning teams were raised on post for people to see who ...
Read More

Dress your fans for success with branded clear totes that will strengthen your brand and whisk them through your stadium ...
Read More

World Championship events call for a championship-level noisemaker like "The Rapper." This strong, safe clapping hand will add enthusiasm and ...
Read More

The FanFan is sturdy coated stock, printed on both sides and provides three applications all in ONE premium giveaway - ...
Read More

Masks are not only a sign of the times, they are mandatory in most public settings. Including your arena. So ...
Read More

The trading card world is back!  After a couple decades of over-production damaged the popularity of trading cards collecting cards ...
Read More

Often when a new product arrives on the scene its not long before several factories start to pop up with ...
Read More

Stadium scarves are a novel new way to keep your patrons comfortable and broadcast your name or message in style ...
Read More

Temporary tattoos are an inexpensive giveaway or a great tool for interactive teams. Dress your fans for success with a ...
Read More

Bam Bams/Thunderstix will get your crowd involved in the action. Order one batch for the entire season, fill the arena ...
Read More
Previous Article

Gameops Redefined as a Hairdo

Cover your fans with this unique twist on a face mask giveaway for the holidays.

Smooth the security line and get your brand into fan’s hands with these clear tote bag options.