Clippers hosted Pride Night on Jan 1st in LA, which was an important night explained best here on SNNation.

The whole night was branded with LGBTQ colors, performers, and apparel. Each bit of detail was crafted with the common hope of creating inclusion for all. It all culminated into a moment on the kiss-cam, where two men kissed each other, and it was met with a roaring applause. There were 17,868 people at Staples Center on New Years day and they nearly all came together for an incredibly inspiring moment. A moment that potentially taught other LGBTQ children in attendance that their sexuality is okay. A moment that may have saved a life. 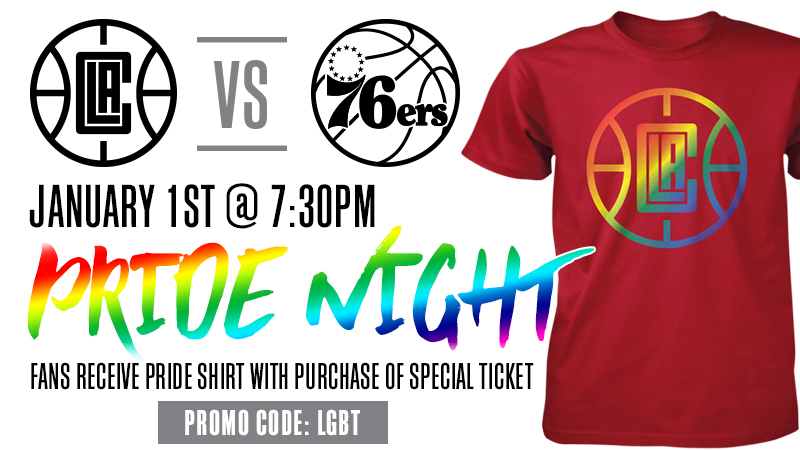 Players from Lambda basketball will also be given access during the day to play on the Staples Center court, which is a nice touch.

“The Clippers are proud to represent every part of L.A. as we continue to amplify the powerful message that diversity and inclusion makes us stronger,” Gillian Zucker, Clippers President of Business Operations, said in a statement to Outsports. “Respect for different backgrounds, genders, heritage and cultures has long been a part of the Clippers platform and we’re thrilled to celebrate and embrace the LGBTQIA+ community with Pride night.”

The NBA’s Los Angeles Clippers will hold their Pride night for LGBTQ fans on Jan. 1 vs. the Philadelphia 76ers at Staples Center at 7:30 p.m.
Confirmed performances for the night include those by openly gay country singer Brandon Stansell (who will sing the national anthem) and hip hop artist Snow Tha Product (halftime).

Truly humbled that the LA Clippers will recognize me during their Pride Game tomorrow night. Looking forward to the panel discussion prior to the game vs the 76ers. The jersey waiting at the hotel is fantastic. #LAClippersPrideNight #NBA pic.twitter.com/rWdwDTZpux

Team reaches out to Vets on #NationalVietnamWarVeteransDay.

See how your halftime act can get people talking.