Give Dan Dunn a stage and the PaintJam begins. America’s Speed Painting Sensation!

PaintJam has been captivating audiences for over 10 years. The dynamic and rousing performance fuses art and entertainment for an unforgettable experience. There’s a reason Jimmy Fallon, Sir Richard Branson, Ellen DeGeneres and the NFL love PaintJam! It’s an incredible show and spectacular art all rolled into one.

Recently Dan Dunn has added his son Harvey into the act, Dan explained:

Dan Dunn: So my son, Harvey’s, youngest of five, and he had art talent. But I really saw him more. He was the theater kid. So he was the scarecrow in The Wizard of Oz. He was in all the Hollywood, he was in Greece, little Shop of Horrors. He’s worked back stage, front stage, everything in high school. And we thought he was going to go to school and be the next Jim Carrey. He kept the family amused. So he got wind that we were looking at hiring another speed painter and expanding the business.

His mother told him and I was like, “Well, thanks a lot.” And he came to me, and I just thought, I know he can draw. I’ve seen him do a few drawings here and there, but he wasn’t drawing obsessively all the time, the way I was as a kid. But I knew he could draw. And when he drew, he was very draftsman, like, he’s very precise. And I was like, wow, he’s got talent. But I knew that my caricature background is a whole different thing. But he came and he said, “I want you to train me as a speed painter. I want to do it.”

I don’t know what you’re doing, but I think he sensed that I thought that he couldn’t do it. And by God, he was determined. And this kid is so structured and regular, and he’s such a good actor and such a good artist. And he’s just blown us away. So he approaches it differently. I get on stage, and I’m kind of a wild man, but I’ll tell you, I can have a good show, or I can have a bad show depending on how I’m feeling or whatever.

But he rehearses so much more. And both of our shows have gotten better since he’s been on the team because I can’t show up and halfway through it now, I’m like, I got to go rehearse. Harvey is going to see me. If I don’t, he’s going to be riding my butt backstage and rubbing my nose in it. But if it goes wrong, I got to be the leader. I got to be the teacher. And so it’s been really good for both of us. But he’s killing it.

And he did a thing for Weird Al. Weird Al Yankovic put him on his Instagram face page, and then he did a thing for Nickelodeon. And then we just did a show for the Tennessee Titans, and they agreed to use him. And we’ve just got him going for Dallas Mavericks next week.

Jon Cudo: I love it.

Dan Dunn: Yeah. So they wanted me, and I just said, look, take a look at my son. I showed him the video of Weird Al and Titans. He paid Bum Phillips for the Titans. They just loved him, but he’s hard to compete with for me. I’m 63 and getting old and whatever and I still have energy on stage. The adrenaline kicks in and I go, but, man, he’s 25 and good looking and skinny and nerdy. He gets up and the audience just love him. And he’s a natural mind, and he’s a natural actor.

So he plays to the crowd, he gets it. And then we do things as Dunn and Son.  Where we go get up and both of us work on the same canvas. And that’s hard because we have to rehearse. We have to finish at the same time. We have to do little routines like we’ll do the Beatles and it’ll say, oh, revolution. Let’s both act like we’re playing guitar solos and then raise our fist in the air and then turn around. So we’ve got these choreographed moves and let’s do a kick thing during all you need is love and put our arms around each other, give each other a hug, create this family value.

I take the mic and say, “I still believe it.”  The audience goes nuts. It’s just beautiful, but also with the video production. He’s such a good video producer. So when we’re doing these live events now, virtual events, he can make it look like we’re live. 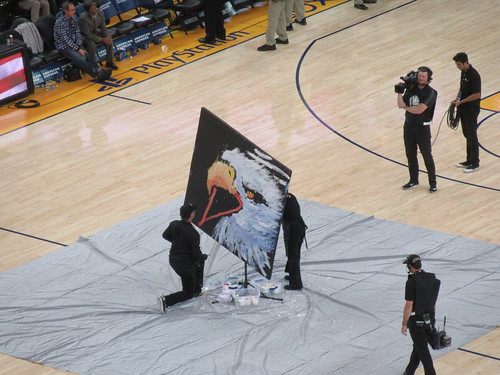 Fun and MEMORABLE in Tulsa

Host Jon Cudo is joined by Tyler Scheuer star of Tyler’s Amazing Balancing Act, Emperor of Fun David Raymond and Game Presentation wiz Amanda Greco. It’s a balanced discussion about touring acts, whether mascots should wear masks, Joe Biden’s hair and playing Simon Sez via Zoom. In other words, it is a Party you won’t want to miss.