A look at A Necessary Spectacle by Selena Roberts.

If your are looking for a game operations and entertainment blog today, this may be a disappointment. Rather today I just wanted to offer another book recommendation from the world of sports.

I just finished A Necessary Spectacle by Selena Roberts (sports writer for the NY Times). The book covers not just the 1973 Battle of the Sexes (tennis match between Billie Jean King and Bobby Riggs) but the effects of the life of Billie Jean King.

The book chronicles the intersection of three major players in the Battle of the Sexes (King, Riggs, and Margaret Court) along with many other players who shaped the event and the life of Billie Jean King.

At age five the young Billie Jean looked up at her mother and said, “I am going to to something special with my life.” Indeed. That girl turned into one of the great womens tennis players ever, but along the way became the cause celeb for women’s rights, feminism, equality and more. At each turn she shouldered the burden of being at the forefront of movements and causes, no matter the personal cost to her…and did it while performing at the highest levels of her sport.

Bobby Riggs and Billie Jean KingThe book was superbly written, full of valuable background and insights both of the sport and the people, but also the ripple effects of her life. The final chapters focus more on the current realities of women’s status in sports through the successes (and failures) of US Women’s Soccer, women’s tennis, and Title IX.

Billie Jean King stands along with athletes like Muhammad Ali and Jackie Robinson as truly great. In my eyes greatness doesn’t just come from winning, but is achieved by being true to yourself and your beliefs by being willing to risk your legacy in the sport in exchange for making a greater social change. It’s what separates Ali, Robinson, and King from Michael Jordan and Babe Ruth. Ali believed enough in his convictions on the war and the draft to risk his career, Robinson risked everything for racial gains, and Billie Jean lifted the equal rights movement. 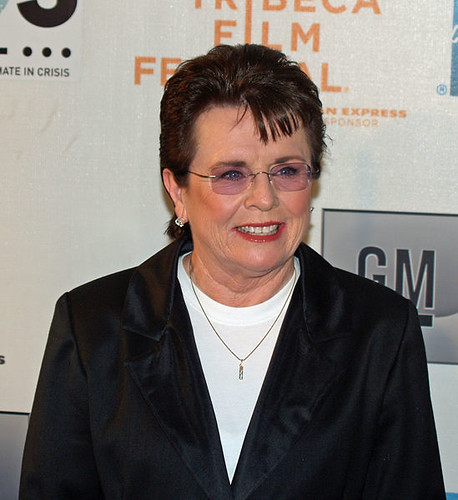 Yes, I have listened to the debate about Jordan’s ability to provide this leadership through his “business leadership”, but I contend it’s very different since Jordan is risking nothing, unlike the others. Billie Jean King did the same thing with her business ventures (a women sports magazine, Team Tennis, etc) but also took the bold social risks that Jordan has never dare to take.

Finally, I thought the book was so powerful in illuminating the change King had in her lifetime. I am a huge Ben Franklin buff and marvel at the world he entered and the one he left, and the impact he had while living. He was born just following the Salem Witch Trials in an English colony. An unenlightened era in undeveloped world. He left a newly created country, an elevation of science, commerce, self awareness, and democracy….and he wasn’t just along for the ride. He had a tremendous impact along the way. After reading A Necessary Spectacle I started to feel that King has had a similarly powerful effect on the world, changing the perception of women, equality, and feminism. The little 5-year-old girl was right….she would do something special with her life.

The new Mighty Game Ops Network is up and running. Find out about our first call and the launch of this new Network on Gameops.com.

What will sports look like post-shelter at home? We look at the new landscape.