Team will ask their fans to sit on a confection consisting of two round graham cracker cookies, with marshmallow filling, dipped in a flavored coating…all for the love of the game.

Day 3 in our week series features from the Charleston Riverdogs, South Atlantic affiliate of the Yankees owned by The Goldklang Group (including Bill Murray and Mike Veeck).

The team’s promo calendar offer a bunch of clever promotions to fulfill their year-long mission to Make Fun: RiverDogs believe that we can create a better, happier, more joyful community by helping people “Make Fun.”

And what’s more fun than sitting on a Moon Pie….I mean, right?

World’s Largest Moon Landing (July 20): A moon celebration unlike any other in Minor League Baseball starts when the first 1,000 fans receive a RiverDogs souvenir moon shirt. Moon trivia, moonwalking and Moon Pies all lead up to the end of the seventh-inning stretch, when all fans in the ballpark will simultaneously “land on their moon,” creating the world’s largest moon landing. PLUS, in honor of the original moon landing, if the game lasts shorter than Neil Armstrong’s 2 hours, 31 minutes and 40 seconds on the moon, every fan will go home with a voucher for another RiverDogs game. 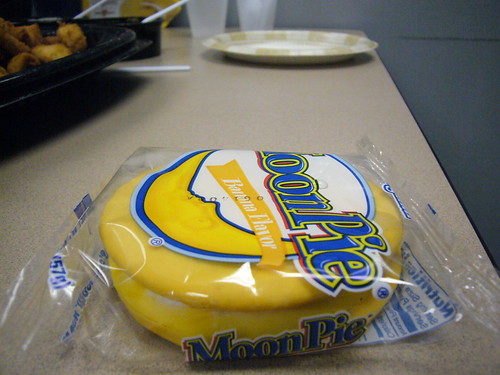 Stay tuned all week as we look how the team is making fun:

Dig out your Boiled Peanuts gear, perfect your half court shot, and get ready to see the longest baseball game at the Joe! This year we're breakin' records and #MakingFun – Who's ready? . . Check out RiverDogs.com for our full 2019 Promotional Schedule! #MakeFun #DownAtTheJoe

Don’t Talk about this Promotion

Komet’s build on their Halloween tradition with a (new) perfect ECHL opponent.