The Coyote rolls out a media announcement that highlights his current excellence.

Although he already won the BIG mascot award of 2020, the Coyote continues to wear no pants and collect hardware.  This time he has won the NBA Mascot of the Year award.

Winning the award is no surprise, but was is notable (and evidence of his current excellence) was the Coyote/Spurs incredible media roll out of the announcement.

Take a look at his twitter feed to see it all in action.

MASCOT OF THE YEAR 👏🏻👏🏻👏🏻 The @spurs Coyote has been voted 2020 NBA Mascot of the Year! He’s celebrating with a socially distanced solo boat parade on the River Walk 🎉🏀 #kens5eyewitness pic.twitter.com/oZybZ45Dgo 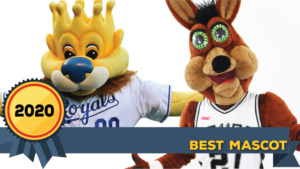 Ring Out the Old Year

Isotopoes gallery up their last 10 giveaways and remind fans the fun and value of a Isotopes game.

USHL Hockey team sends the reminder you don’t have to LOVE hockey to LOVE our hockey games.