Kobe Bryant’s untimely death created the need for teams and players to honor the legendary star. We look at examples from around sports.

The untimely death of NBA Legend shook the sports world in January 2020. The five-time champion and iconic star touched with glimmer of a Hollywood icon inspired legions fans globally, a new generation of players and had been crafting a new legacy off the court as a creator, father and ambassador of the game.

Clipper Star Kawhi Leonard explained the best tribute to Kobe was to go out and play the game, “Knowing him personally, I know he’d want me to come out here and ball and just be great.  Everybody’s sad. No words can explain the impact he had on the sport.”

In the coming days teams, players and fans found ways to pay tribute to Kobe in countless ways to help ease the grief and honor the man and the victims of the helicopter crash. We look at these tributes in this collection from around sports. 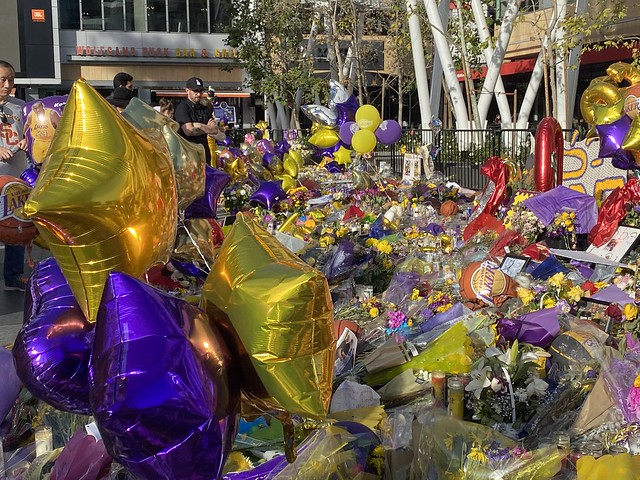 Following the anthem most teams held a moment of Silence and remembrance, in many cases either 24 or 24.8 seconds long. Touching video tributes noting Bryant’s impact on the game and those he inspired on and off the court played at that time or in opening time outs.

The Pelicans show tribute to Kobe & Gianna Bryant with a 24 second moment of silence before the game pic.twitter.com/zj5lGoKp6v

Most teams took the 24 second violation in the NBA, followed by the other team taking the 8-second backcourt violation both in honor of Kobe Bryant whose jersey numbers were 8 and 24. Teams included the Bucks, Wizards,Heat, Raptors, Hawks, Cavalier, Celtics, Pelicans, Blazers, Pacers, Spurs, Warriors and Sixers.  The Timberwolves augmented ith the eight-second tribute by placing the ball on the free-throw line until that time had expired.

Additional tributes ranged across the league. Near the end of the third quarter when the Raptors opponent the Atlanta Hawks reached 81 points and their score lit up purple on the main scoreboard in remembrance of the 81 Bryant scored on the Raptors in 2006.  The Raptors began warmups with Bryant-related songs played, including Juicy J’s “Who Da Neighbors” and Lil Wayne’s “Kobe Bryant.”

The 81 points the Hawks have are lit up purple. Very cool. pic.twitter.com/BKOmJI5wMF

The Moda Center and nearby Convention Center is lit up in purple and gold to honor the death of Los Angeles Lakers legend Kobe Bryant on Sunday, Jan. 26, 2020.

Purple and Gold over the Rose Garden says a lot.

In Dallas the Mavericks coaching staff wore pins with Nos. 24 and 2 (the numbers worn by Bryant and his 13-year-old daughter, Gianna).  Mavericks owner Mark Cuban has announced his team will retire the No. 24 jersey in tribute to Bryant.

The Pistons wore custom black uniforms during warm-ups. On the back, each featured either No. 8 or No. 24 and the name Bryant.

Every Detroit Pistons player honored Kobe Bryant pregame with either a No. 8 or No. 24 jersey.

In Philly where Kobe played High School basketball a framed No. 33 Aces jersey was displayed midcourt. The Sixers held a 33-second moment of silence of Bryant and eight additional victims. The Sixers rang a bell nine times and shone nine lights on the court during the solemn remembrance. The Sixers passed on standard pregame introductions for both teams and instead played a video of Bryant’s last introduction in Philadelphia from December 2015. Both teams wore black armbands and Sixer players came out to warmups wearing No. 8 and 24 jerseys. Joel Embiid wore the number 24 in-game.

When the Warriors returned home 10 days later to play the LA Lakers they had several layers to their tribute. Players like Steph Curry and Klay Thompson wore Kobe jerseys when entering the building and on the bench. Each fan was given a shirt with a special Kobe and Gigi numbers, along with a restyled NBA logo depicting Kobe’s signature jumper. Before the game there was 24 second moment of silence for the victims.

In Brooklyn, the Nets powerful tribute centered on two empty courtside seats, which had bouquets of purple and yellow flowers.  Bryant sat with Gianna in those seats for a December 21 game against the Atlanta Hawks.

The crowd observed 24 seconds of silence in honor of Bryan as  the video board showed the names of all nine victims who died and their names were each read by PA Announcer Olivier Sedra.

Nets players warmed up in red and yellow Chinese New Year T-shirts that also had “Bryant” written across the backs. Fans wore Bryant’s No. 24 Los Angeles Lakers jersey. Brooklyn’s in-game host wore a Bryant T-shirt and an arena usher notably wore purple and gold lipstick and eyeshadow.  Nets Guard Spencer Dinwiddie announced that he would be changing his No. 8 — one of Bryant’s former numbers — to No. 26 as a show of respect to Kobe.

Chicago’s United Center was lit in purple and gold to honor Kobe. Photos of the Lakers legend were projected on the exterior video boards. A makeshift memorial of messages surfaced, all in chalk around the building.

On Page 2 we look at tributes from Soccer, Baseball, Entertainment and Kobe’s Los Angeles Lakers…

February 2020 Party in the Back Podcast