That Guy has a new book out. Check it out here.

Congrats to our friend Cameron Hughes on the release of his new book KING OF CHEER.

You can hear more about the book on the November 2020 Party in the Back Podcast. Cameron joins us for nearly an hour to talk about the book, his career and assorted nonsense.

And to make this post more memorable and something people will truly talk about at the water cooler, I am sharing a backstage photo of me with Cameron.

The backstory: I was at a Cavs game on a night Cameron was in town to perform.  I was dressing up like a Raptors fan for a mascot skit.  That day I had (in the effort to look ridiculous) gone shopping for a Canadian Tuxedo to go along with my Raptors cap and jersey. I don’t play around when I am called on to do a skit.

The slang term Canadian tuxedo refers to an outfit pairing jeans with a denim jacket. A Texas tuxedo can describe this pairing as well as a suit jacket worn with jeans, cowboy boots, and cowboy hat.

As soon as I am in my full get-up for the night, trying to look as foolishly Canadian as possible, my Canadian friend Cameron bounds into the dressing room….in a matching outfit. 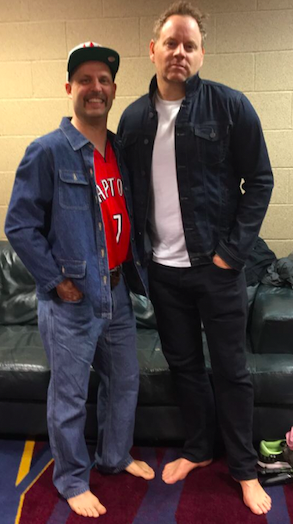 Other questions you may have:

‘Twas the night before book launch and all through……. ( fill it in!) Sens Jersey they gave me as payment 26 years ago… signed by some beauties! I’m ready. Thank you all! 📚🤷‍♂️🙏📣🍾

We’ve all seen him. The wild dancing guy throwing shirts at major sporting events from the Olympics to the NBA Finals. And we’ve all wondered…”Who IS that guy?” THAT guy is…Cameron Hughes. And yes…THAT’s his job.

For over 26 years, Cameron Hughes has ignited crowds at sporting events across the globe. The only professional sports entertainer of his kind in the world, Cameron has performed at over 1,500 events including 2 Olympic Games, 5 NBA Finals, 2 Stanley Cup Finals, and the US Open tennis tournament.

His relentless optimism, infectious cheering, and unbridled dancing have delighted and energized unsuspecting crowds, infusing Cameron’s indelible spirit in over 30 million people’s memory banks – often without anyone even knowing who the man with the famous dance moves really is.

So now, for the first time ever, Cameron is letting everyone in on his big secret – how he became the world’s first professional fan. His new memoir KING OF CHEER is an inspiring story of perseverance and self-belief that recounts how he took his genuine love for people and turned it into the most unlikely of careers.

Starting from humble roots in Ottawa, Canada, this is the once-in-a-lifetime collection of his best stories from a love-able underdog who couldn’t make his high school basketball team but would eventually rub shoulders with the titans of sport on the world’s biggest stages. Cameron has showcased his engaging style of bringing people together during memorable interactions with the likes of Steve Nash, Roger Federer, Novak Djokovic, Connor McDavid, Wayne, and Janet Gretzky, Michael Andretti, Katie Couric, Alanis Morrissette, Trevor Noah, Russell Peters, Prince, a Supertrooper, and even a few Prime Ministers.

He ignites a spark in everyone he meets, creating great stories that are ready to share. Although Cameron specializes in helping people laugh and let go, the heart of his story is equally about taking risks, challenging social conventions, seeking peak performance, and contributing to a greater purpose. His unorthodox method of connecting and inspiring crowds have been put into action not only at the world’s highest-profile sporting events but also at corporate events for some of the world’s most renowned companies, and in philanthropic service to those in need.

Behind KING OF CHEER is also a uniquely human story, as Cameron recounts the highs and lows of his improbable journey. From his lifelong struggles with ADHD to difficult family challenges in high school – a moment that would shape the rest of his life – KING OF CHEER is a transcendent celebration of the human spirit.

In Cameron’s own words, “I hope my story will inspire you to cheer a little louder, smile a little wider, dance a little crazier, contribute to your team, be fearless, and most importantly, to GET UP and become your own biggest fan. I’m thrilled to take you on my journey and show you the true power of cheer.”

The Threshers find a way to make their promotion still shine without the game.