Cudo: Let’s touch real quick on your background. This is your sixth year in Tampa with the Lightning, but you were a baseball guy before that. Talk about where you came from.

Franzone: Well, again like most of us in this industry, you’re the intern who fits the suit . But I was lucky enough to the intern with the Mets in 1986 straight out of NYU film school. The dream was to go to the West Coast, write screenplays until one hits and then rake it in, but I fell in love with sort of that immediacy of being able to make images and videos and then have it played out almost nearly immediately and get a great reaction.

So I kind of came on board when these big screens were just in their infancy or early infancy and the Yankees happened to be looking for a youngster pretty practically to look to run their show because they had just purchased a big video board and the closest person who was running it certainly didn’t have any sort of training at least in the primitive sense to run a show or create content and all of that. Yeah sure, sign me up and I’ll do it. I wasn’t a Mets’ fan but what the heck. I had just graduated so I might as well take the leap and that turned into 10 great years with the Yanks, built up a nice award-winning show and proud to say and capped it with the World Series win in 1996.

After that my wife and I were just been married and we said we don’t like snow very much so Florida became an option and I was lucky enough to get a gig at Disney’s Wide World of Sports just as they were opening that complex there as their display systems manager. But the lure of the world we work in, Jon. It’s hard to explain, but there was something about game night for some lunatics like us and I kind of missed it.

It just so happened that the then named Devil Rays were tuning up down the Turnpike from Orlando and St. Pete and they were four months from opening day and they didn’t have a screen and they didn’t have a contract for control room and they called me and they said, ‘Are you interested?’  I jumped and I said yes and got back in the baseball and then I spent 10 years there. They weren’t very good on the field, but we always aimed to produce a show there that we would be proud of. 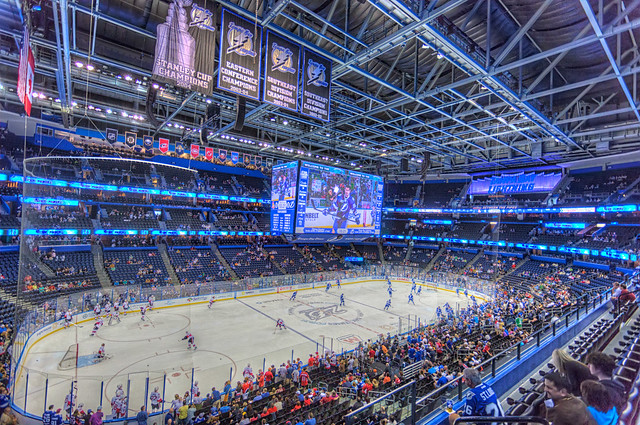 I always tried to apply Yankee mentality to a lot of the things we would do there and then after 10 years there came over here to Lightning in 2008. The first two years were a little rocky but once the new ownership came in 2010 it has been a wonderful experience. It’s one of probably some the proudest work I think I’ve done.

Cudo: Let’s dive in and talk about some hockey promotions from the NHL and minor-league teams. I’d love to pick your brain a little bit and see how some of these ideas tickle you or spark interest in you in terms of the game operations and entertainment perspective, how they might sell tickets or increase fan participation, build or enhance the team and sponsor brands, which sounds like it’s right in your wheelhouse.

But before I dive into that I had one question that as you spoke about making judgments based on your team and your brand, do you want to throw out one of the best ideas that you couldn’t use because it just didn’t fit the brand?

Franzone:  You know what, it’s funny, I’ll even use an example for today. What have we got going on Saturday? On Saturdays we are playing Buffalo. Buffalo unfortunately is not off to a great start the season, so one of the graphic kids here is saying we’re doing a costume camp, so to speak, where we’re overlaying a Frankenstein head and a Dracula head and whatnot and we’re looking for payoff to this gag. What is it going to be?

A lot of the time with a Kiss Cam we have shots and look at what is the payoff.  We’re only talking about a minute feature. So we’re looking for that last overlay to put on the fun and it’s like pack mentality.

One of the guys says once we put a paper bag on there.  Which is funny, but we’re not about disrespecting the opposition.  That is part of our brand tenets and we’re going to respect our opposition. Some teams allow the ‘let’s blow up the logo’ when the team opened and all of that stuff.  But that’s not who we are and it doesn’t fit our brand. It doesn’t mean it’s wrong to poke fun at your opposition, but we don’t do that.

So I put my foot down and said not this time. It’s funny and if I was watching at home I’d probably laugh, but in the context of the hockey game, not just the fans, but the media and the management that are watching you want make sure you’re tired up in a bow correctly.  If it’s not then it’s going to make the hair on the back of your neck go, ‘You know what, it’s not on brand.’ and you have to be protective of it. So that’s a perfect small little example of where you’re doing a sponsored gag or promotion and you’re going, ‘That one didn’t fit.’

Cudo: Interesting. It’s funny I think that like you said it’s an easy laugh and also I would think about when you belittle your opponent it’s not quite as impressive when you beat them.

Cudo: You’ve already defined that they’re not that good.

Cudo: Well, that’s where we disagree, Jon. I think mooning is always fun.

Franzone: [Laughs] Fifteen years ago that might have been a different story.

Confetti can be a valuable tool for mascot, event operations and game entertainment professionals. This month we review how some teams are utilizing handheld launchers to enhance their presentations.