High Five is a game review series from Gameops.com. Game review from a Harlem Globetrotters Show in December 2021. We looked at five ways the Trotters created a memorable live event experiences for fans.

Our “High Five” series looks at five stand out elements from a live game review around the country, along with assorted features and notes from our on-site visit.  This game review was done by Editor Jon Cudo. 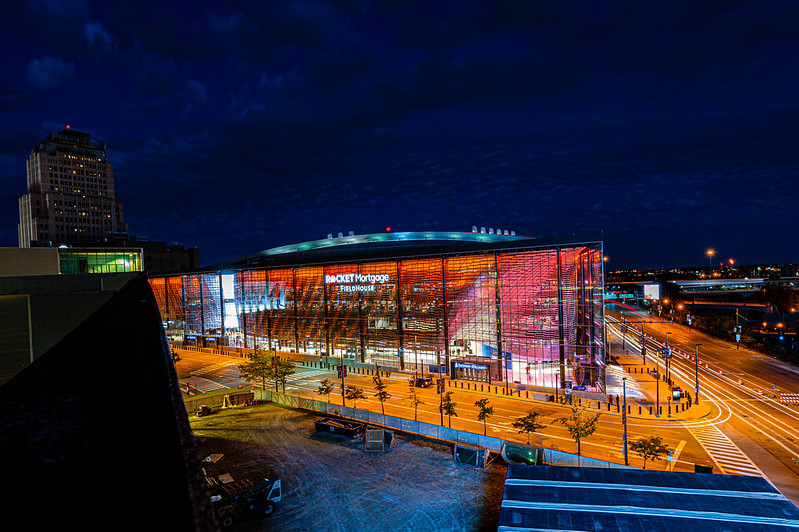 The worldwide touring Harlem Globetrotters show visited Cleveland Ohio’s Rocket Mortgage FieldHouse on December 28th, 2021. The event featured the Globetrotters against the Washington Generals wrapped into the full entertainment showcase the Globetrotters have built over the nearly a century. Once a perennial entrant of the World Professional Basketball Tournament the team gradually integrated comedy routines into the show.  Now approaching their 100th season the Globetrotters road show is more entertainment than sport, but audiences come for the showmanship and flair over a legitimate contest.

The Globetrotters have been adjusting and retooling their show for the pandemic, obviously affecting their day-to-day operations accordingly.  Behind the scenes the group has safety protocols guided by the CDC in place and follow strict rules.

This was an annual visit to Cleveland on part on their #SpreadGame Tour. The Globetrotters tour with two groups, with teams, support staff, coaches, entertainers and mascot.  We reviewed the evening show for this article, but attended both the evening show and the matinee. They do testing and have made changes to their post-game autograph session as well.

Zoltan Berensci from the Globetrotters elaborated “At first we did auto sessions on concourse to alleviate congestion.  We have since brought it back to the court.  Still masked.  Limit touching and keep distance for pics.  We do testing for everyone on tour.  If someone gets it they get quarantined for the recommended time. As you can imagine with a touring unit this happens from time to time but we are very responsive and responsible with how we operate as it pertains to this virus.  The nice thing is we have a great roster of guys we can pull from.  Both from the player and staff side.”

Here are our five highlights from the Harlem Globetrotter Show

1. Effective use of the Pre-Game Show

While a touring show production is different than home team, keys to an effective production are similar.  You may think Globetrotters would need to set-up and explain their show and roster more, but the truth for many teams is that a majority of fans attending any game are coming less than handful of times a year.  Using the pre-game to explain your show, traditions and introduce the roster is critical for the Globetrotters, but not much less important to any team. 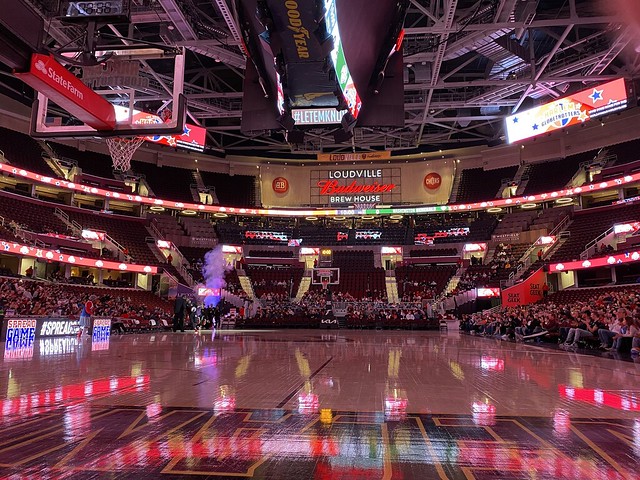 The pre-show includes warm-ups for the players but they use the time wisely to teach their expectations for fans. Clap along, expect comedy to break out at any time and, most of all, be ready to be entertained.

Keeping it clear and simple they get fans to clap along with the music, introduce sound effects (like the 4-point play sound cue) and challenge the two sides of the arena to make the most noise. They do it pregame to set the tone and insure fans know they are part of the show and establish the roles.

The Globetrotters use the pre-show as valuable real estate to build the framework of their show, establish characters and roles and with eye on keeping fans engaged and entertained. For teams playing at home it may not seem as critical to use this time.  Often the crowds feel like repeat visitors who will know your show already, but it can help build your brand, educate fans and serve as valuable sponsor inventory.

The Globetrotters touring format is a reminders that a consistently fresh take on the pregame can serve you well.

With the established value of the pre-show now you need thoughtful content to fill the time.  The Trotters make a point of educating fans to their traditions and ‘calls to action”, again with an effort to bring fans into the show.

One of these traditions is how to react to the 4 Point Shot. This new innovation from the Harlem Globetrotters is located on the court 35 Feet from the basket, 12 feet further than the NBA line.

More important than the shot is the call to action for fans.  And since this is unique to their show, they obviously need to teach (or remind fans) how to react when they see a 4-Pointer.  So they build a whole pre-show segment to do just that [see video above].

You can see the 4-point play and the crowd call back from this show at PPG Place in Pittsburgh.  That well used pre-show time conditioned fans how react and it makes the show more engaging and entertaining. It’s like letting everyone in on your private joke, if you will. And this was all accomplished during the pre-show for fans who only see the shows once a year.

Those teachable moments also include the Trotters introducing fans to the characters from the show, including  Grandmama,  Dr Broke Ankles (who was the Generals Coach), the Host, Mascot Globbie, Trotters Head Coach Sweet Lou Dunbar, and ever the music operator Donatello.

The best way to make the present feel important is to honor the past. It shows there is a legacy to greatness.  And if you witness something incredible today, it will be talked about in the future. It’s the same reason you hang Championship banners, because winning matters.

The Globetrotters understand this legacy.  The stars of today are not overshadowed by legends of the past, rather they are the modern day reflection of these icons. By honoring the stars of the past the status of being a Globetrotter is enhanced. And along the way you the call back to the past is entertaining as well. 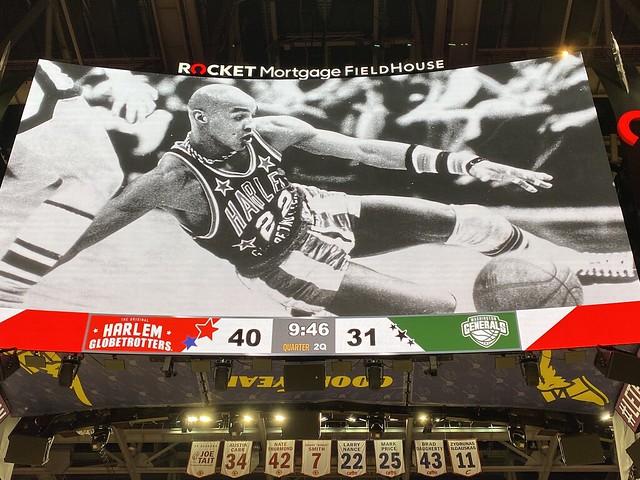 Harlem Globetrotters Producer Zoltan Berensci talks about the show as a “rite of passage” as parents share the show they watched with their parents. The show is a tradition for families, built on traditions. Honoring the players is also a way to remind older fans of the shows they once enjoyed.

Traditions are important in our lives and provide many benefits. We intentionally create and continue traditions because they provide a sense of belonging and meaning to our lives. Family rituals nurture connection and give us comfort.

During this year’s tour they honored legendary Globetrotter Curly Neal.

Frederick “Curly” Neal was an American basketball player who played with the Harlem Globetrotters, instantly recognizable with his shaved bald head. Following in the footsteps of Marques Haynes, Neal became the Trotters’ featured ballhandler, a key role in the team’s exhibition act. (wikipedia)

Neal passed in March 2020, which coincided with shows being closed due to the pandemic. As the tour restarted they looked for a way to honor Curly. A thoughtful video in the show along with #22 patches on the jersey were adopted this year allowing fans to recall his starring role with the Globetrotters.

Berensci noted ” we did the same for Tex Harrison and Meadowlark Lemon.  We always honor the legacy of these amazing past players.  We also do special recognitions from time to time.  Recently we did a nice recognition for Cleveland Harp in Indianapolis.  He also worked for that building in Indianapolis as an usher later in life so we worked with the building on getting his family to the show and honoring him.”

Finding ways to honor your team’s past is the key to making the present feel more important.

See Page Two for notes on keeping a narrow focus and making the audience part of the show.

Gameops.com Plus is our value-added membership site. It is a network to enhance the fan value of events.  Twice a month we gather for an hour long discussion on an industry topic with a special guest to share their insights. Leaders like Claire Czerniuk, Zoltan Berensci, John Franzone, Tyler Ferraro, Maurice Brazelton, Jackie Maldonado, Todd Bosma, and Anton Wright have discussed topics from developing talent to building a home-field advantage. Upcoming calls include Zach Frongillo from the Savannah Bananas (7/27) and Colleen Flynn from Mascot-Link (7/13).  Free One Month Trial is available now on Gameops.com PLUS.

March 2022 Party in the Back Podcast

Dads and kids play catch on the field for Reno’s Fathers Day Promotion.