High Five is a game review series from Gameops.com. Game review from the Detroit Pistons in January 2021. We review five ways the Pistons revved fans up at their game with creative use of in-house entertainment and production elements.

Our “High Five” series looks at five stand out elements from a live team reviews around the country, along with assorted features and notes from our on-site visit.

Editor Jon Cudo and Seasonal Intern Mick Rowan visited Little Caesars Arena in Detroit Michigan on January 3rd, 2021. The Detroit Pistons faced the Boston Celtics. The NBA Pistons are under state regulations limiting the crowd, so fan attendance was less than 500, but the team presented a full game of entertainment. The Pistons also followed state guidelines for mask wearing and social distancing. The NBA also has COVID protocols in place that limit access to the court and provide new safety precautions for event production, including limitations on court access.

Indoor gatherings of more than 10 and up to 500 persons occurring at a non-residential venue are permitted only to the extent that the organizers and venue:

(2.C) Require that each person at the gathering wears a face covering except as provided in section 6 of this order.

(3.d) Gatherings at professional sports and entertainment facilities, including arenas, cinemas, concert halls, performance venues, sporting venues, and stadiums and theaters, are prohibited unless the venue is designed to ensure that patrons not of the same household maintain six feet of distance (e.g. stagger group seating upon reservation, close off every other row, etc.).

Our host was Claire Czerniuk, the Pistons Director of Game Presentation. Claire is new in the role in Detroit after Directing at Madison Square Garden and the Connecticut Sun (WNBA) previously. 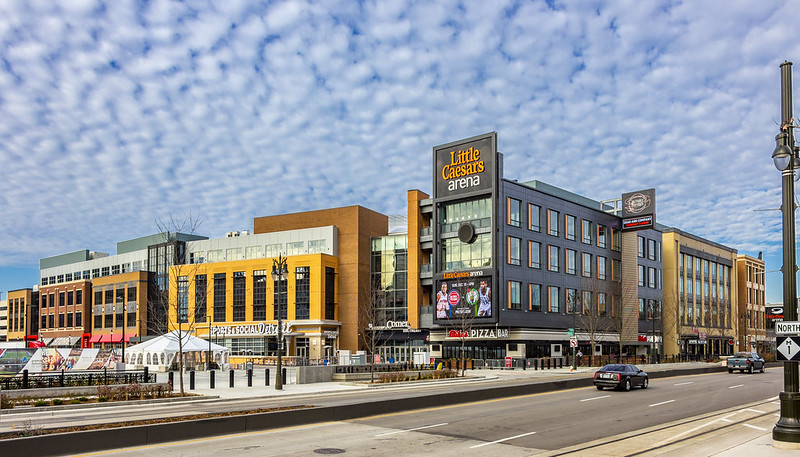 Despite the mandated attendance cap the Pistons delivered a full-game of entertainment. Heavy on dance, but presented with slightly smaller performance teams.  The show was entertaining and provided atmosphere for the live and TV audience.  NBA teams are using a sound board to replace live audience sound making it easy to get lost in the reality that fans are largely absent.

The new Little Caesars Arena is a state of the art facility with a large center hung HD board and a dynamic programable LED lighting package hung set in the rafters (visible in many of the attached photos and video). The team features its iconic PA announcer (Mason) and leans into the cities music history.

Claire directs the game using ShoFlo .  The pre-game is filled primarily with music, including segments with a live DJ. Music selection and DJ interaction is a strong element and fills the pre-game with a vibrant natural energy.

Here are our five highlights from the game in Detroit

The pandemic lockout hasn’t stopped the Piston’s Graphics Department from working. The pre-game was a showcase of clever, interesting, pleasing and well-executed graphics. Graphics were married with live video creating a showcase for the players, player personality and Pistons branding.

Here is an example of an “Evolution” graphic showing how Blake Griffin has changed over the years. Notably the Pistons didn’t shy away from showing Blake with his old team, which is all part of his story. The graphic was followed with a live shot of the Piston’s star warming up. 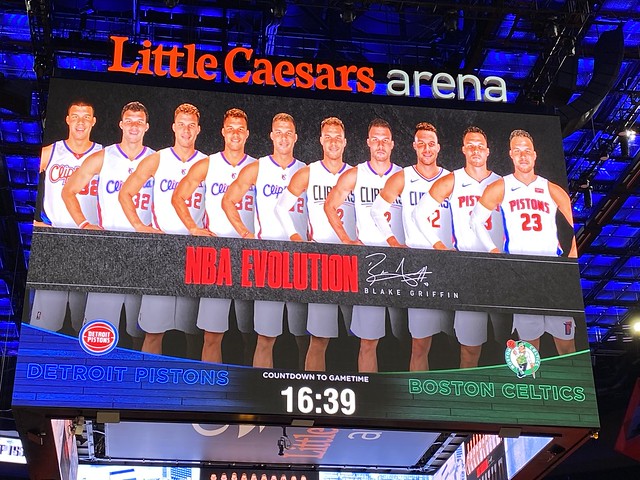 Backstage footage helps break down the boundaries between players and fans. Some of this footage is shot on media day, but this experience with players continues all year. The Pistons used arrival footage which allowed fans to see them in a different setting.

Second-year player Sekou Doumbouya was shown entering to somewhat comical effect.  Sekou is a native of Guinea and the Detroit winter clearly is a change of pace for him (it was 34 degrees outside). Really funny shot of Sekou that personalizes him to fans in Detroit. The live shot was followed by a stats graphic telling more of his story on the court. 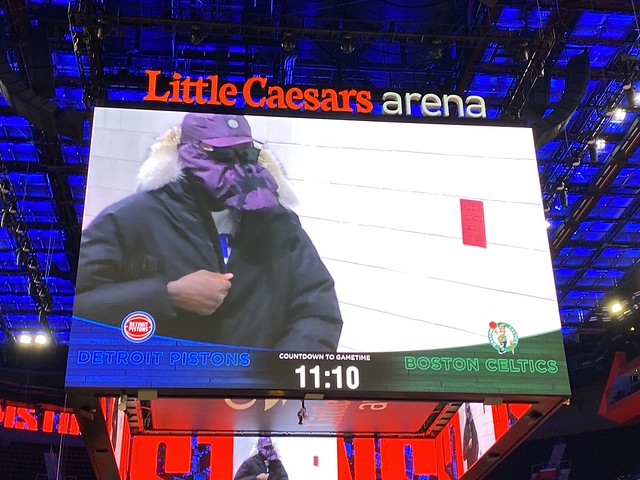 The pre-game was also the Piston’s opportunity to share player musical taste with fans. Again, not an uncommon feature but the Pistons merged the player and music into a very appealing graphics addition. Here newcomer Jerami Grant shares his playlist with fans. 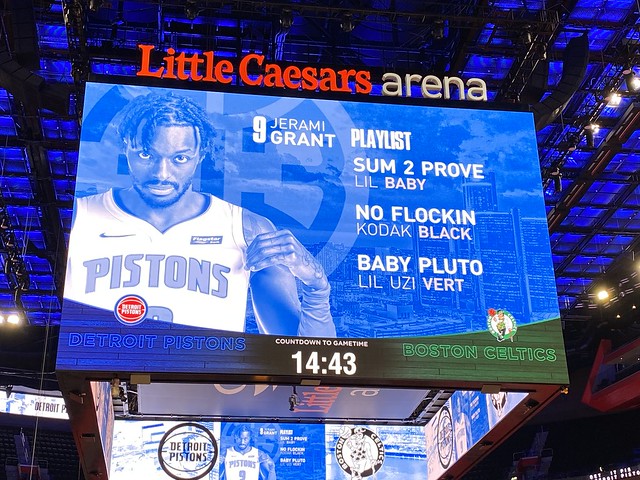 All of these graphic features took advantage of the Pistons impressive scoreboard and created a dynamic, entertaining and interesting showcase of their players. 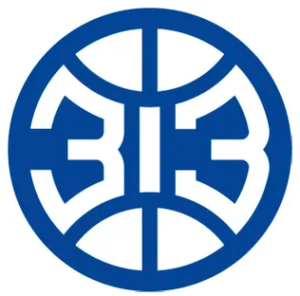 The Pistons have new branding, which accentuate the team’s connection to the city and features “313,” Detroit’s area code. It also uses a large “DET” design in the Pistons’ familiar red, white and blue basketball design. The game operations and presentation staff did an excellent job promoting and broadcasting this new focus.

Claire explained “…. (it) has been a goal to infuse within game programming as much as we can. The newly unveiled “313” and “DET” logo treatments reinforce the franchise’s love for the city and embodies the culture and collective understanding that those numbers and letters serve as more than just an area code or location.”

The show hits this 313, DET,  and D-UP branding in a lot of different ways, including: 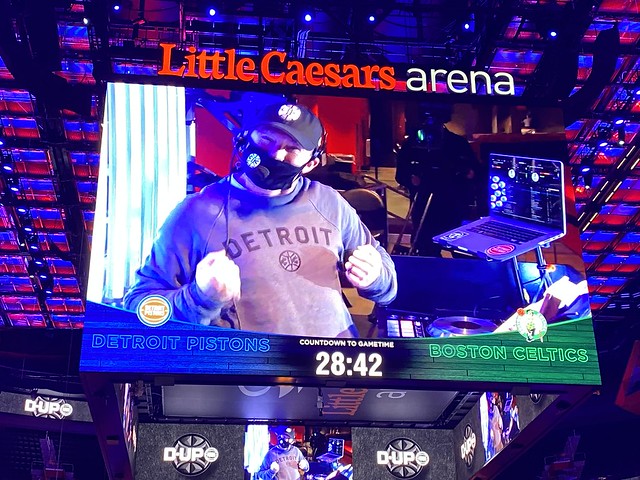 It never felt forced, but I left understanding that “313” meant Detroit Basketball.  An excellent use of game presentation to brand the show and illuminate the new identity.

Powerful and effective branding driven by the game presentation.

Standard Introductions have to be completely rethought with limited fans and access to the court. The Pistons, like all NBA teams had to rebuild their introductions with the league limitations on court access due to COVID protocols.

Claire refocused the introductions by building the show for broadcast, not live fans. “Ultimately my philosophy in a fan-less environment is to produce in-arena for broadcast. Once we have fans back in-arena, we might tweak slightly but it will depend on seating chart and what becomes the natural “front” to program to which is a deviation from historically programming to a 360 degree audience,” explained Czerniuk.

Instead of the immersive theatre-in-the-round, the Pistons focus on the hard camera side and providing a backdrop.  “Having dancers all on one side dancing in unison serves more of a punch than having them spread out in-arena,” Claire added.  There are no plans to change the arrangement for the 2020-21 season.

Good choices by the Pistons to play the hand dealt to them and making the best of it. The introductions fit the moment and the mandates. 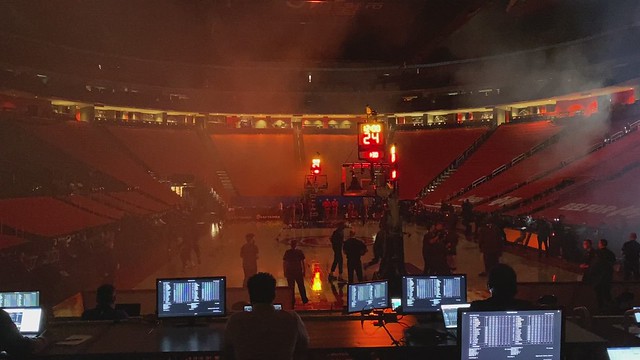 Glimpse of the Future in San Fran

Famous athletes Chug It Out in viral Cam Moment.

With no fans teams are turning to social media as a replacement medium for player content.

June 2019 Party in the Back Podcast