The use of large US flags is gaining popularity with sports teams.  We look at proper display at events, following the flag code and helpful hints to make your next display impactful and respectful.

The use of large US flags is gaining popularity with sports teams and event planners.  Typically carried by many people on to the playing area for the national anthem, the flags are then unfurled and often slowly waved.  Many teams utilize service members to carry the flag.

Some teams have expressed concerns about displaying the flag in this manner, since it is not explicitly noted in the US Flag code. We encourage teams to work with local military offices for more details, however it should be noted these large field flag displays are widely accepted.  As noted in the US Flag Code, the key is that the flag is shown proper respect; Not letting it touch the ground and treating it with reverence.

The Flag Code may be fairly tested: ‘No disrespect should be shown to the Flag of the United States of America.‘ Therefore, actions not specifically included in the Code may be deemed acceptable as long as proper respect is shown. 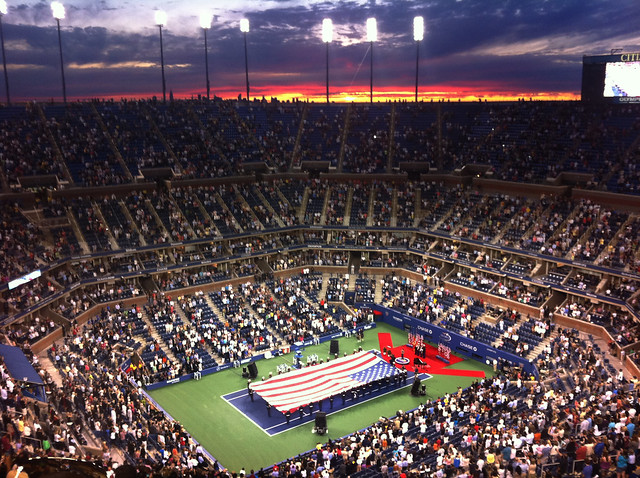 We recommend using one person every 5-6 feet and at each corner.  For a 30 by 20 foot flag using 22 to 28 people is ideal.  Proper practice and run-thrus are essential for an effective and respectful display.

We filmed a team rehearsing their flag display to help showcase how it can be done effectively.

The NHL used such a presentation at their Winter Classic game in Buffalo NY.  Here is a story from the NY Division of Military and Naval Affairs.

New York Army National Guardsman Sgt. Kevin Krantz, a member of A Company of the 27th Brigade Special Troops Battalion, joined 60 Soldiers, Airmen and Marines in unfurling a 60 foot by 30 foot American flag prior to the New Year’s Day National Hockey League game between the Buffalo Sabres and the Pittsburgh Penguins.  (Full Story)

Here is another recommended story on field flag displays:

…The latest can’t-miss blend of sports and patriotism, a combination increasingly presenting itself through gigantic American flags, unfurled by dozens or hundreds of people in an attempt to elicit a sense of awe and nationalism in the surrounding crowd.

Once the gaudy lure of attention-seeking car dealerships or other roadside attractions, big flags have found a comfortable home inside the ballparks, arenas and raceways of American sporting events. (NYTimes.com)

This field flag shown is a 20 by 38 foot flag. You can purchase Large Field Flags (3 sizes) at thestore.gameops.com. Notes pertain to this size flag. You can adjust for larger or smaller flags accordingly.

When unfurled you should have between 24 and 32 people surrounding the flag, about 7 on the long sides and 5 on the shorter sides. Adjust accordingly for your staff and flag.

For best results practice several times using the same staff you use on game nights.

Flag can be carried on the court by 7-10 people. It should be bunched up longwise with the long side ends easy to find. 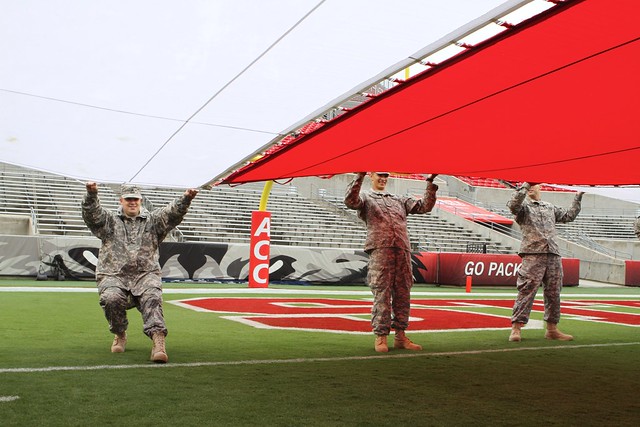 Once in place, staff for the two longer side stand on either side of the flag. Staff for the shorter sides should be on either end, ready to grab the flag as it is unfurled.

For best results one end of the flag should be stationary, with one side moving away from the original line. As the flag is opened completely the shorter side staff fills in and hold the flag. Holding the flag around shoulder height allows for a full view of the flag, a comfortable position for the holders and prevents the flag from touching the ground.

We will #NeverForget the lives lost and the incredible acts of heroism on 9.11.01. pic.twitter.com/JzrXbj0gx8

Following the anthem and presentation of the colors, the flag can be gathered again, reversing the process above. The two sides can both gather the flag. It is recommended to lift the flag when gathering so you can see that the flag doesn’t droop.

Once gathered the long narrow flag can be taken off the court and stored in a proper manner.

See the flag code for details for addition details and flag etiquette. While the flag code could be interpreted this style of display to be improper, most military personnel approve of this display for sporting events when carried out in a respectful manner.

Thanks to the Cleveland Cavaliers for allowing us to film a rehearsal.

That Promotion was BLANK