Cyclones tap into the feeling and present a spectacular in-game promotion.

Last weekend I took the annual Hockey trip with my son, enjoying games with the Wheeling Nailers and Cincinnati Cyclones. While the trip is for leisure and I focus on hanging out with my best buddy, it’s hard not to enjoy and take note of a great game presentation.

A singer in a smoky room
A smell of wine and cheap perfume
For a smile they can share the night
It goes on and on, and on, and on

On our second night I was blown away by an excellent show in Cincinnati which included a promotion that I will not forget.  Of course as Bill Veeck reminds us “When the fan goes home and talks about what he has seen, he is getting an additional kick out of being able to say he was there.” I’m here today to get that additional kick to tell you I was there. I lived it and this promotion rocked.

Like nearly every team, part of the game is to promote other events in your arena or town.  Last Saturday was no exception.  The Cyclones had two tickets to promote an upcoming concert appearance by the rock band Journey.

One of the most legendary rock bands of all time, JOURNEY, announces their Freedom Tour 2022, featuring very special guests TOTO. The diamond-selling Rock & Roll Hall of Famers will take the stage in 40 cities across North America with their catalog of global chart-topping hits, including “Don’t Stop Believin”, “Any Way You Want It”, “Faithfully”, “Lights” and more. (Heritage Bank Center site)

After the second period Chuck-a-Puck the team took the lights down and their excellent host cued the crowd to sing along with Journey’s iconic “Don’t Stop Believin'”.  The results were incredible.

The host asked for phones to light up the crowd and they were joined by hundreds of Star Wars Night light sabres.  This Cincinnati crowd didn’t need a lot of encouragement to belt out the Steve Perry vocals.

The results were magic.  As you can see in the video there was TOTAL buy in.  Fans stood and sang illuminated by phones and the Jedi-powered sabres. I was impressed as host hit the perfect notes of encouragement to pull the crowd in and goose their energy to an insane level without ever having to raise his voice.  Just a spot on read of the situation.

The Cyclones host is Jay Kruz from WREW in Cincinnati.

Promotions don’t have to be expensive.

You don’t have to yell for a response.

Hats off to he Cyclones for an amazing emotional experience with their fans.  Thanks for showing how great game production can have a remarkable and lasting effect on fans…  and for giving me the additional kick of being able to say I was there.

Thanks to Cyclones’ Sean Lynn for his help with this post. Thanks to Oscar for sharing another hockey weekend with your old man. 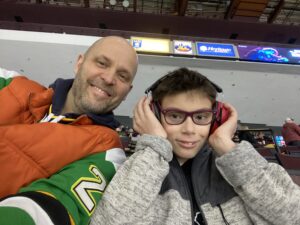 Making Deals in the RGV

Despite the pandemic lockout the Griffins found a way to connect with fans. The team maintained  their NYE tradition in 2021 with a Virtual Celebration.