Gameops.com: What is the hardest thing for new acts to do to break through?

Dominic Latkovski: I would say the hardest thing is just to come up with something good that hasn’t been done already. It needs to be something unique, maybe like Myron Noodleman, that is different and off-the-wall. But that’s only the beginning of it. Most folks starting out don’t realize all the other things that must go into a show. Things like coming up with the initial investment, selling, quality of performance (every single night!), managing, selling, promoting, organizing, traveling, selling, being professional, marketing, creating new ideas, and on and on. These little things are the things that make our company stand out from the others. It’s really no different than running any other type of business. If people don’t want to, or can’t handle, all of these things, then they are better off just going out and getting a mascot job for a team. It kills me to see folks think that all they have to do is create a character, give it a name, and then hit the road. There is so much more to it, and if it was easy, there would be a whole bunch of people doing it!! That’s why I give The Chicken credit – he’s been doing it for so many years and has worked extremely hard at it! He had a vision and poured his life into making it successful. 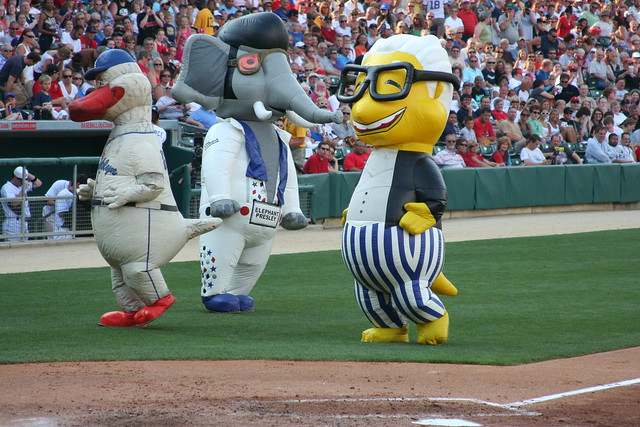 Gameops.com: What makes ZOOperstars! so successful?

Dominic Latkovski: I would say it is definitely a combination of things. The cleverly named characters, the goofy things we can do in the unique costumes, the fact that we do choreographed routines, and the way we run our organization help make it special. We run a professional operation, we have great performers, we take the time to get to meet the staff of the teams who hire us, and we strive to make the fans’ experience at the game something special! Another thing about our show is the fact that kids love us the minute we first appear, but the adults appreciate it even more than the kids by the end of the show. For some lucky reason, people just love our shows!

Gameops.com: Did having another act help you launch the second act?

Dominic Latkovski: Without a doubt, having that springboard helped us out! Since most baseball teams knew us, it was natural for them to trust that we would come up with something at least as good as BirdZerk! was at the time. We already had the knowledge and experience of how things worked, so we just applied everything that was good with BirdZerk! into ZOOperstars!

Gameops.com: Are you considering any new shows, or are you focused on keeping the bird and ZOOperstars! fresh?

Dominic Latkovski: We always talk about new concepts for shows, as well as things that may help out what we already do. I would never announce to our large audience what we are going to do next, but stay tuned – As far as keeping things fresh, that is always one of our toughest tasks. We don’t want to do something that someone else is already doing, yet there are only so many new ideas out there. We know that if we do a great show, even if it is not entirely different than what we have done before, then those fans at that game are going to love it and rave about it to the team. Some fans will say “It’s the same thing,” but many new fans will love it! And, the ones who have seen it before often want to see it again! They ask for certain routines! 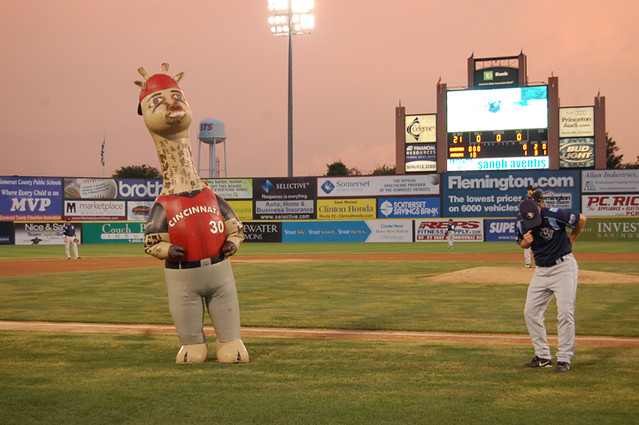 Dominic Latkovski: Here’s three: One of our smarter performers (Steve) was in the locker room before the AA All Star Game in Norwich a few years ago. There was a guy standing nearby, priming his voice to get ready to sing the National Anthem. Steve asked him if he was singing the Anthem and the guy said “YES.” Steve told him to “Knock ’em dead,” and then walked away. He never realized it was Michael Bolton!

Earlier this year, we had a funny episode during a routine where Roger Clemens eats someone on the ice. Our guy getting eaten cracked his nose on the ice when he fell to the ground while being swallowed. His nose was gushing blood, but he had to continue on with the routine. So he jumped on the other guy’s (Steve again) back just like he was supposed to and proceeded to get tons of blood all over Steve’s hair and down his back. Steve was freaking out, but there was nothing he could do! That costume still has blood stains all over the inside of it today, because they just wouldn’t come out!!

My brother was working the crowd as Whale Gretzky at a hockey game for the Motor City Mechanics. We knew Kid Rock was in attendance that night, so we went by his suite. Kid Rock, who had been enjoying himself a little too much that night, sees us coming and hangs over the rail and starts laughing at Whale Gretzky. So my brother sprays Silly String all over his face, in his long hair, and in his beer. It took about 10 seconds for the guy to even realize what was going on. His drunk friends just laughed at him and gave Whale Gretkzy high-fives! 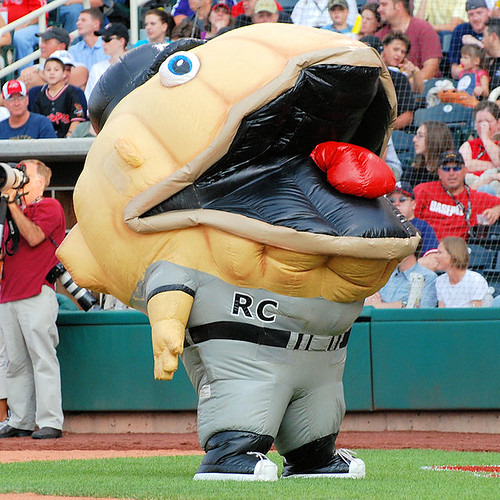 Gameops.com: Who’s better looking, you or your brother?

Dominic Latkovski: My brother Brennan is better-looking, smarter, and he drives a nicer car. But I can still beat him in golf, basketball, pool, darts, and “bite the bubbles.”

[Brennan was unavailable for comment on this contentious question.]

Thanks to Dominic and Brennan for sharing some of their experiences with our readers. One of the most common questions we get from teams and acts is “how do new acts break through.”  While it is very difficult to make the step from act concept to successful touring act, the Latkovski’s have found the keys to success twice.

Love Wins in the ATL

Entertainment Acts are back at the ballparks as we inch towards ‘normal’. As normal as a 8 foot Canary with thick glasses can be.

Give Dan Dunn a stage and the PaintJam begins. America’s Speed Painting Sensation!