Gameops.com: It’s proven to be very difficult to start new acts. How did you get started with the BirdZerk! and the ZOOperstars (and which came first)?

Dominic Latkovski: Actually BirdZerk! came before ZOOperstars! The act that today is known as “BirdZerk!” was originally known as “Billy Bird & Company.”

That’s how my brother Brennan and I actually got started in this whole thing to begin with. I had been hired to be “Billy Bird” for the AAA Louisville Redbirds in April of 1990. The Billy Bird costume was made by Ted Giannoulas‘ mother, who made his Famous Chicken costumes as well.

So, naturally, the Billy Bird costume resembled The Famous Chicken, except it was all red instead of multi-colored.

I immediately loved being Billy Bird, and everyone kept telling us that we should take our show on the road like The Chicken. We started performing routines at Redbirds games, doing skits that me, my brother and our father would come up with. Some worked, and some didn’t! But I worked my ass off, and I was happy to be getting $35 per game to be the mascot of the Louisville Redbirds. Brennan would get $25 to perform various skits with me at that time.

Then, luckily, two things happened that really worked out well for us! First, the AAA All-Star Game was held in Louisville in July of 1991. We did not realize at the time, but all of the general managers and owners from the other AAA teams were at that game. We put on a great show that night! The place was rockin’ and it was on national television. So we were able to showcase our abilities for many people that night! Secondly, in December of 1992, the Baseball Winter Meetings were held here in Louisville. We had talked about taking our show on the road for a couple of years, and this was the perfect opportunity to give it a whirl. I had just finished college, and one of my professors from a marketing/entrepreneur class believed we had something special! He convinced me that our new act would have some success! I was a bit unsure, but invested $6000 of my own money for the venture. We put a tape together comprised of our best stuff. We were hoping (and I was praying since it was my money!) that we would get four teams to hire us for the 1993 season so I would at least get my money back. At this time, the Redbirds had given me permission to take the costume on the road and do as many shows as we could, as long as I made it back to town for all of their 72 home games.

#TBT to BirdZerk! signing autographs to all of his amazing loyal fans! We couldn't do it without you! pic.twitter.com/rr5UestYFG

As soon as the trade show doors opened, our booth was slammed! We started booking shows all across the U.S., Mexico, and Canada!

We ended up doing 48 shows on the road in 1993, in addition to the 72 I did for the Redbirds. Looking back, I don’t know how I did that many games, but I was only 23 years old at the time, and I guess that helped! It was then that we knew we had something special, and we ran with it!

The next year (1994) the Redbirds said I could focus solely on doing shows on the road. They hired another guy to do Billy Bird for their home games. We ended up doing 71 road shows that year! Then, after a disagreement with the Redbirds about how much in royalties we should have to pay them for the right to use Billy Bird on the road, we decided to split from them and become independent. So, in 1995, we had to ditch Billy Bird and come up with something new.

We knew we wanted something that was similar to Billy Bird so I would be comfortable doing the moves and maneuvers that I had learned in Billy Bird. So, we came up with the name BirdZerk!, then worked on what it would look like. We designed it to be a more colorful costume than Billy Bird, with crazy hair and loud colors. Finally, we knew that BirdZerk! had to have an attitude! 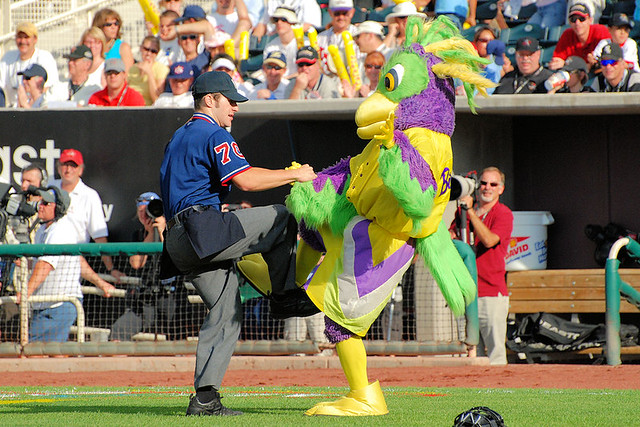 Our number of bookings for 1995 dropped a little, but we forecasted that would happen as we took one step backward to take two steps forward in the future. Once teams saw our new concept, we were back to a full summer schedule the next year. These days, our BirdZerk! schedule fills up months in advance and we continue to put on great shows for teams all across the country!

In 1998, we created ZOOperstars! It really stemmed from our father’s insistence on creating a character named Harry Canary. He kept trying to get us to put a Harry Canary character into the BirdZerk! show, but we didn’t see how it fit. So, we came up with Shark McGwire, Ken Giraffey Jr., Pee Wee Geese, and Cow Ripken Jr. to make a baseball team of funny characters. We had recognized the positive feedback we were getting from our Air BirdZerk! character we introduced in 1996, and we decided to make the new act out of air characters. Then, we just had to come up with a name for the act. That is how ZOOperstars! was born!

It has really taken off and has surpassed any expectations we may have had! We now have 30 characters and 15 performers, including five full-time employees. It has been unbelievable what we have been able to accomplish with our two shows so far!

Gameops.com: How long did it take you to catch on with teams?

Dominic Latkovski: Because of the two breaks we caught (mentioned above) we had some pretty good success right off the bat. Some teams didn’t hire us early on because we were affiliated with the Redbirds and they didn’t want to say they needed another team’s mascot to help entertain their fans. Some teams didn’t hire us early on because they thought we were trying to be just like The Chicken. Now, after 13 years of touring and putting on great shows, just about every baseball team knows that we have a different style than The Chicken. We are strong in areas where he isn’t – especially dancing and just being “hip!”

As far as ZOOperstars!, it caught on with baseball teams right from the get-go. We still have a bunch of markets and teams to go after, and that will come with time. Take Major League Baseball and the National Hockey League for example. We do a few teams in each league now, and the shows always go great!

Whenever the rest of those big-name teams get on the ball and realize what we have to offer, we’ll do more of those big-name teams. For some reason, they don’t want to settle for “a minor league-type” of entertainment, but when they do catch on, it will create a bunch of new business for us. As the Philadelphia Phillies said after we appeared at the Phanatic’s Birthday Party, “This was the first time the Phanatic has shown up at his own event – and we loved every minute of it!”

So if the team with the most popular and best mascot in Major League Baseball says that about us, then we know we are doing something right.

Plus, we do many shows for college basketball, baseball, football, hockey, and even volleyball. Add some fairs, festivals, corporate events, and other appearances to the mix, and our calendar stays pretty full. So to answer the question, many teams have already caught on to us, but there are many more still out there who we would love to help out.

See the next page for more on the ZOOperstars!

Love Wins in the ATL

Entertainment Acts are back at the ballparks as we inch towards ‘normal’. As normal as a 8 foot Canary with thick glasses can be.