The Best of 2019 Awards complete with seven categories. Congrats to all our winners.

Cameron Hughes must be experienced live to truly feel his effects. As his popularity grows, more and more fans know he’s a plant…but they get to see THAT GUY! The concern that fans are in the joke and the show will loose steam has been removed and teams are finding out it actually just enhances the reaction.

The Vegas Golden Knights used Cameron for 10 plus games and they built variation of his reveal that delighted fans and made his show even more fun.

One industry leader explained “I’m a big fan of Cameron and how he can work every single crowd. He has mastered reading the room and adjusting his act accordingly.” In recent years Cameron has refined his understanding of how his act works and leveraged that in every area to maximum effect.

Cameron Hughes is now a three-time defending champion in the category.

Hello, it’s me and I’m so excited to be IN THE HOUSE with the off the charts Vegas Golden Knights fans this year! We’re going to take it to new levels at a few games this season. Big shout out to the Game Entertainment department, the VGK organization, the city of Las Vegas, and all OF YOU who bring it each game. Last season, I also had the pleasure of doing a few speaking events for local schools, sales teams, and special events while I was in town. Please shout if I can do anything for you or your organization. See you soon VEGAS! #DropthePuck #GOLDENMOMENTS #VegasknowsHockey #letsDance #goldenknights 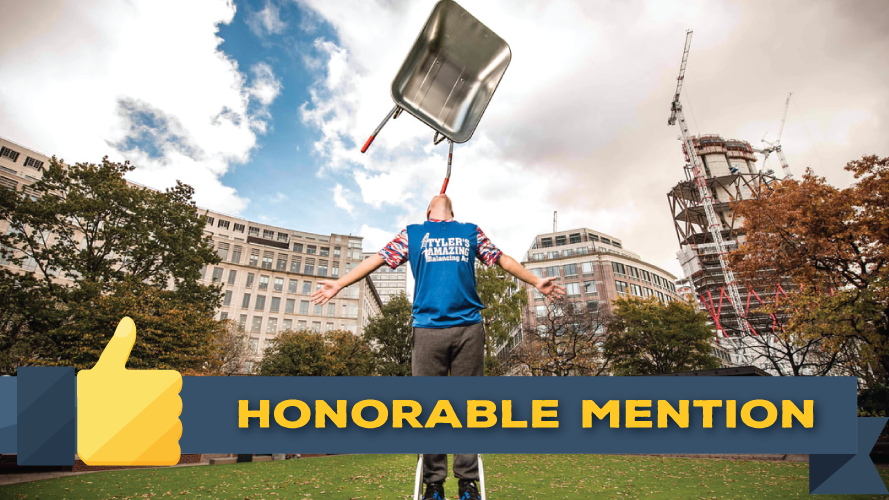 Baseball executives across the country are raving about Tyler’s Amazing Balancing Act.  Like Cameron, much of his value is his in-the-stands performance as he connect with small groups and delights with smaller interactions.

One nomination pointed out “Tyler had whole sections of 100+ people laughing one minute, and the next minute had all their jaws dropped by balancing a beer on top of a water bottle.”

Tyler Scheuer shows a genuine joy for what he’s doing and often goes an entire game without a break. Another breakout season for Tyler who is becoming a top act across all of baseball and basketball and an Honorable Mention for Best Act of 2019.

Listen to the Best of 2019 Audio Round Table discussing all the categories and winners with out panel of Jon Cudo, Amanda Greco, Pat Walker and Benjamin Hill. – December 2019 Party in the Back Podcast

At one time this category was getting easier to collect and review, with most teams posting their introductions online and the elite teams would capture a solid buzz around their efforts.  Now it seems everyone has a version online (crowding the field) and many teams have 3-4 opens (some even have a new one every game) so pinpointing excellence has become more difficult.

In addition NBA and NHL teams are spending more than ever on lights, sound, video edits, interactive lights, lasers, smoke and pyrotechnics. The stimuli onslaught can be overwhelming for fans and hard to access on a YouTube clip.  Despite these challenges, our panel all seemed to point west where the Vegas Golden Knights once again stood out for their theatrics and showmanship. The stories they told capture fan enthusiasm in a way that was unmatched.  The team struck a balance with the expensive tools and the art of storytelling to produce powerful, memorable and unique introductions.

One industry leader plainly stated, “the Golden Knights stand alone in this category”.

You also know you are doing introductions right when you entire fan base comes early so they are sure not to miss the show before the game.

Tampa Bay earned an honorable mention for their thoughtful introductions which also tell a story while integrating high-end tools like a huge Tesla coil and the world’s largest indoor pipe organ into the show. The storytelling comes first and the tools enhance the spectacle.

Listen to the Best of 2019 Audio Round Table discussing all the categories and winners with out panel of Jon Cudo, Amanda Greco, Pat Walker and Benjamin Hill. – December 2019 Party in the Back Podcast

December 2019 Party in the Back Podcast

A Roundtable Discussion regarding the Best of 2020 Awards on Gameops.com.  Host Jon Cudo is joined by three industry giants who take the party to the next level.