Which team is doing the best job in their game operations and game presentation. We level the playing field by considering budget constraints to minor league teams. Consider creativity, value to fans, overcoming sport and budget limitations, quality of presentation, and attention to detail. 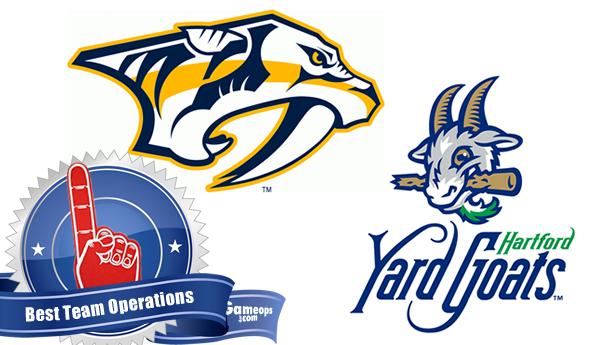 Our final category is always a challenge to whittle down from so many teams doing great work, building creative elements and adding value for their fans.  This year we had a really great group of about 20 teams that were discussed and we worked our list to four that stood above the rest.

First the Nashville Predators. Yes, winning helps…but you have to be in a place to capitalize on the on-ice success to achieve greatness, and the Predators have been building their entertainment and operations for 10 seasons.  They started from nothing in a town known for a lot of things, none of them hockey.  They trained the fans, built their audience and it all paid off in 2016-17.

One panelist summarized “Smashville rocks. The energy and environment that they’ve created over the past couple of seasons is tough to replicate and harder to match. The NHL’s product should almost always win this category based on the sheer nature of the atmosphere at the games.” Their energy permeated the entire community and clearly bolstered their team success on the ice.

One rival NHL team executive shared “I’m just a huge fan of everything they do.”  And it wasn’t just our panel, crossover Sports Announcer Charles Barkley even gushed about Smashville during their playoff run. As far as bringing in top talent it also doesn’thurt when one of your players is married to Carrie Underwood who might surprise you one night to sing the anthem.  Or when your fans jump into the fray as well.

The Hartford Yard Goats in just their second year have vaulted into a top team as well.  Named for rail-slang with team colors that give a nod to the former NHL team this teams has already endeared themselves to local fans. The Yard Goats went beyond Fireworks to please their fans. Well-executed night for First Responders and Military, Strike Out Cancer and a celebration for Roberto Clemente sprinkled their calendar. They took chances with wild acts like the Human Cannon Ball, as well as baseball staples like the ZooperStars! Filling your calendar is one part of the job, but great execution sets you apart. 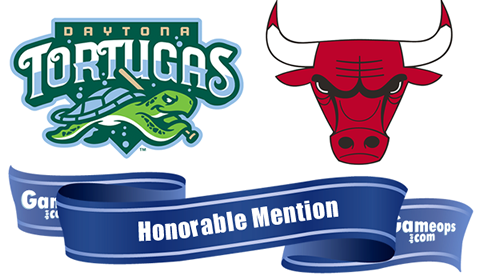 The BEN (Bulls Entertainment Network) is the group of assets the Bulls use to produce some of the NBA’s top in-game entertainment.  Their crisp execution, couple with talented performers have become the model for the NBA. All their teams and performers on the high-end of their peers and together their show is always an entertaining showcase. One panelist described the BEN Network as  “a well-oiled machine that pumps out engaging halftime and timeouts through the season. You can tell they put a lot of thought behind promotions and performances that they do.” </h4″>

The Tortugas may have gotten the most attention for their Bob Ross Night, its wasn’t lost on our Panel that they are producing a great show nightly for their fans.

Congratulations to the Best of 2017

Since 2007 the Best of Gameops.com award winners will receive The Golden Steagle™ Bobblehead trophy to commemorate their award. You can get the full history of the award on the Best of Awards page, including video from The Colbert Report where Stephen Colbert proclaims that receiving a Gameops.com award is “the Big Time.”

Winners may use the “Best of 2016” logo and “The Golden Steagle™” award designation in there promotional material or web site.

Winners will receive an award and letter from Gameops.com. If you receive any publicity or post the award announcement on your website, please let us know.

Thanks to our panel for helping sort through all the great submissions and for sharing their time and insight.